The City and the Pillar: A Novel (Vintage International) (Paperback) 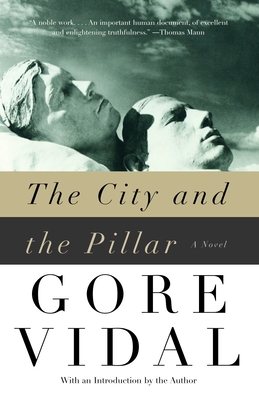 A literary cause célèbre when first published more than fifty years ago, Gore Vidal’s now-classic The City and the Pillar stands as a landmark novel of the gay experience.

Jim, a handsome, all-American athlete, has always been shy around girls. But when he and his best friend, Bob, partake in “awful kid stuff,” the experience forms Jim’s ideal of spiritual completion. Defying his parents’ expectations, Jim strikes out on his own, hoping to find Bob and rekindle their amorous friendship. Along the way he struggles with what he feels is his unique bond with Bob and with his persistent attraction to other men. Upon finally encountering Bob years later, the force of his hopes for a life together leads to a devastating climax. The first novel of its kind to appear on the American literary landscape, The City and the Pillar remains a forthright and uncompromising portrayal of sexual relationships between men.

Gore Vidal was born in 1925 at the United States Military Academy at West Point. His first novel, Williwaw, written when he was nineteen years old and serving in the Army, appeared in the spring of 1946. Since then he has written twenty-three novels, five plays, many screenplays, short stories, well over two hundred essays, and a memoir.

“One of the best novels of its kind. . . . It isn’t sentimental, and it is frank without trying to be sensational and shocking.” —Christopher Isherwood

“A brilliant exposé of subterranean life.” —The Atlantic Monthly