Inventing the Pinkertons; Or, Spies, Sleuths, Mercenaries, and Thugs: Being a Story of the Nation's Most Famous (and Infamous) Detective Agency (Hardcover) 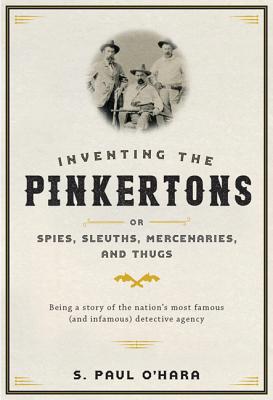 By S. Paul O'Hara
Email or call for price

The fascinating story of the most notorious detective agency in US history.

Between 1865 and 1937, Pinkerton's National Detective Agency was at the center of countless conflicts between capital and labor, bandits and railroads, and strikers and state power. Some believed that the detectives were protecting society from dangerous criminal conspiracies; others thought that armed Pinkertons were capital's tool to crush worker dissent. Yet the image of the Pinkerton detective also inspired romantic and sensationalist novels, reflected shifting ideals of Victorian manhood, and embodied a particular kind of rough frontier justice.

Inventing the Pinkertons examines the evolution of the agency as a pivotal institution in the cultural history of American monopoly capitalism. Historian S. Paul O'Hara intertwines political, social, and cultural history to reveal how Scottish-born founder Allan Pinkerton insinuated his way to power and influence as a purveyor of valuable (and often wildly wrong) intelligence in the Union cause. During Reconstruction, Pinkerton turned his agents into icons of law and order in the Wild West. Finally, he transformed his firm into a for-rent private army in the war of industry against labor. Having begun life as peddlers of information and guardians of mail bags, the Pinkertons became armed mercenaries, protecting scabs and corporate property from angry strikers.

S. Paul O'Hara is an associate professor of history at Xavier University. He is the author of Gary: The Most American of All American Cities.