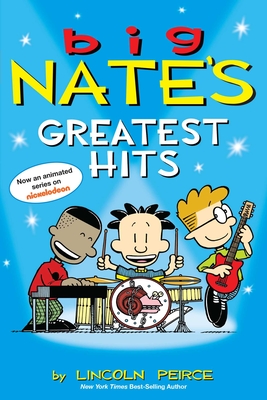 This is book number 11 in the Big Nate series.

Now an animated series with Paramount+ and Nickelodeon!

Big Nate's Greatest Hits collects three bestselling e-book only collections—Big Nate Makes a Splash, Big Nate: Dibs on This Chair, and Big Nate: Pray for a Fire Drill—in this supersized paperback edition. The more Big Nate, the better! Readers will have their fill of Nate's wisecracks and school day shenanigans in this giant collection of hilarious comic strips.

Eleven-year-old Nate Wright is no one-hit wonder. He’s the king of Monopoly, the Michelangelo of P.S. 38, and a Cheez Doodle poet extraordinaire. He’s a sixth-grade superstar—at least, that’s what he tells everyone—and he’s going all the way to Number One. Whether he’s having an imaginary near-death experience, creating another hilarious episode of “Doctor Cesspool,” or meeting the girl of his dreams at summer school, Nate’s always at the top of the charts. The hits just keep on coming in Big Nate’s Greatest Hits!

The more Big Nate, the better! Readers will have their fill of Nate's wisecracks and school day shenanigans in this giant collection of hilarious comic strips.

Lincoln Peirce has been drawing the Big Nate comic strip for more than 20 years. Born in Ames, Iowa, Peirce grew up in Durham, New Hampshire. As a kid, he began creating his own strips in the sixth grade. Peirce taught high school in New York City and has created several animated pilots for Cartoon Network and Nickelodeon. He lives in Portland, Maine, with his family.