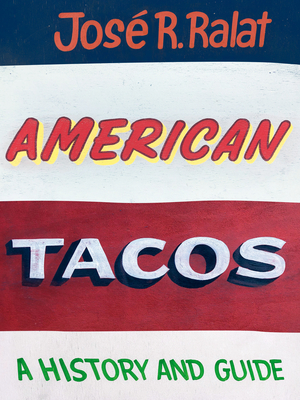 Tacos may have been created south of the border, but Americans have made this Mexican food their own, with each style reflective of a time and a place. American Tacos explores them all, taking us on a detailed and delicious journey through the evolution of this dish.

In search of every taco variety from California to Texas and beyond, Ralat traveled from coast to coast and border to border, visiting thirty-eight cities across the country. He examines the pervasive crunchy taco and the new Alta California tacos from chefs Wes Avila, Christine Rivera, and Carlos Salgado. He tastes famous Tex-Mex tacos like the puffy taco and breakfast taco, then tracks down the fry bread taco and the kosher taco. And he searches for the regional hybrid tacos of the American South and the modern, chef-driven tacos of restaurants everywhere. Throughout, he tells the story of how each style of taco came to be, creating a rich look at the diverse taco landscape north of the border. Featuring interviews with taqueros and details on taco paraphernalia and the trappings of taco culture, American Tacos is a book no taco fan will want to take a bite without.

José R. Ralat is the taco editor at Texas Monthly and the writer behind the nationally renowned Taco Trail blog. He has written for the Dallas Observer, Texas Highways, D Magazine, Cowboys & Indians, and Eater.

[Ralat] gives an in-depth look at each taco's history and showcases other aspects of taco culture that has solidified it as a go-to dish on dinner tables throughout the nation.
— Smithsonian Magazine

A handsome tome…maybe don't read this when you're hungry.
— UrbanDaddy

These 280 pages [in American Tacos] delve into every imaginable angle, from the barbacoa tradition to Baja-style seafood, from Revolver Taco Lounge in Deep Ellum to Hugo’s in Houston. All the cabrito, cabeza, and chapulines you ever could desire are here. He’ll make you dream of tangy-bright or roasted salsas and masa, whether blue or golden-yellow or white. And to that we say, amen.
— D Magazine

When [Ralat] talks about tacos, this dish undergoes a transformation. It's not just a filling-stuffed tortilla. It's a cultural beacon that tells the story of the United States from San Antonio to Memphis to Los Angeles.
— Matador Network

Ralat is at his fiery best while dismantling two of the biggest myths in taco lore: the dueling stereotypes of 'authentic street tacos' and 'white people tacos.' His extraordinary cataloging of the many varieties of Mexican and Mexican American taco experience is more than mouthwatering—it proves just how diverse and exciting this food is, well beyond the 'authentic' stereotype of a tortilla, a meat, some white onions and cilantro...Ralat proves, joyously, that the taco can't be pinned down.
— Dallas Observer

If you thought this would be a polite and matter-of-fact history of America's most popular taco styles, you're in for a surprise...[American Tacos] offers plenty of recommendations on where to get great tacos…But it offers much more than that, tackling history, culture and some controversial points as well.
— Chicago Tribune

[American Tacos is] a 280-page deep dive into the past, present, and future of tacos found around the United States...The lore around Korean tacos, breakfast tacos, parmesan-dusted tacos, Jewish tacos, Chicano locavore tacos, crunchy tacos, and a particularly enticing chapter on the newish brave new world of 'Sur Mex' taco culture of the American south along the Gulf Coast are all brilliantly presented by Ralat.
— L.A. Taco

You'll learn an enormous and entertaining amount about [tacos] in…American Tacos...The book literally covers the map of American tacos, from Texas and the South to New York, Chicago, Kansas City and California.
— Forbes

American Tacos is a must-have guide for taco amateurs and aficionados alike...With glowing reviews from journalists and chefs, Ralat’s latest is a treat for both your mind and your stomach.
— Alcalde

Ralat does a lot of work to show where tacos come from and how they got to be where they are now…One of the great pleasures of this book is the opportunity to to taste many of these tacos through Ralat's descriptions: he has persuaded me that as soon as it’s safe to travel again, I’m going to have to get myself down to San Antonio to gorge myself on puffy tacos.
— The Takeout

You might think that opening a book on tacos right now would be recipe for frustration, its pages loaded with delicious tacos that are just out of reach. You would be, in part, correct — this book will make you salivate like one of Pavlov’s dogs in a bell factory. But it’s also a satisfying meal by itself, and inspiration for future exploration both in the outside world and your own kitchen.
— The Statesider

Ralat's casual, conversational style and his passion for all things taco make for a delightful read. Reading American Tacos is like listening to a friend share his adventures over a shared plate of tacos and a bucket of cold beers. You'll find yourself dipping back into this book like your favorite salsa...American Tacos is the perfect book to help you appreciate the social and culinary importance of tacos and El Paso's influence on Mexican food across America.
— El Paso Inc.

Ralat has the experience to select life stories, recipes, places, and preparation processes that reveal the historical, cultural, political, and symbolic dimensions that every American taco has...This is a travel book, it is a series of interviews, it is a cookbook at the same time, it is Ralat’s own life story that passes from one format to another to tell the unique tale of the taco. And of course, it is a book to delight us. Once you finish reading the book you will want to go out and eat an American taco.
— Pacific Historical Review