After Francesco: A Haunting Must-Read Perfect for Book Clubs (Hardcover) 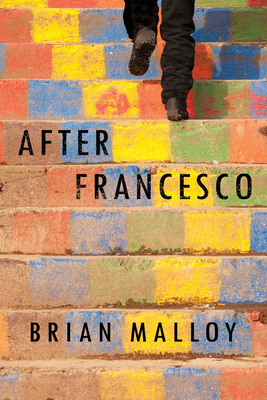 "Like Rebecca Makkai's The Great Believers, author-activist Malloy's newest novel is a heartrending portrayal of the realities of healing.” —Oprah Daily, Best LGBTQ Books of 2021

Acclaimed author Brian Malloy brings insight, humor, and the authenticity of his own experiences as a member of the AIDS generation to this universal story of love and loss set in New York City and Minneapolis at the peak of the AIDS crisis. Published on the 40th anniversary of the disease’s first reported cases, After Francesco is both a tribute to a generation lost to the pandemic as well as a powerful and universal exploration of heartbreak, recovery and how love can defy grief.

A BookBub Book to Read for Pride Month

The year is 1988 and 28-year-old Kevin Doyle is bone-tired of attending funerals. It’s been two years since his partner Francesco died from AIDS, an epidemic ravaging New York City and going largely ignored by the government, leaving those effected to suffer in silence, feeling unjustifiable shame and guilt on top of their loss.

Some people might insist that Francesco and the other friends he’s lost to the disease are in a better place, but Kevin definitely isn’t. Half-alive, he spends his days at a mind-numbing job and nights with the ghost of Francesco, drunk and drowning in memories of a man who was too young to die.

When Kevin hits an all-time low, he realizes it’s time to move back home to Minnesota and figure out how to start living again—without Francesco. With the help of a surviving partners support group and friends both old and new, Kevin slowly starts to do just that. But an unthinkable family betrayal, and the news that his best friend is fighting for his life in New York, will force a reckoning and a defining choice.

"This novel is fresh, well-observed, often funny, sometimes angry, and always real. I can't think of another novel about the AIDS years that captures that difficult, messy, intense age more accurately or movingly." —Christopher Bram, author of Eminent Outlaws: The Gay Writers Who Changed America

"In this highly recommended novel, the pain and rage felt by Kevin and those in the trenches with him is palpable and uncomfortable and real. So too is the love and warmth of spirit they manage to nurture in order to survive." —Library Journal (Starred Review)

Brian Malloy is the activist and award-winning author of After Francesco,The Year of Ice, Brendan Wolf, and Twelve Long Months. The recipient of an ALA Alex Award and the Minnesota Book Award, his novels have been shortlisted for The Violet Quill Award and the Ferro-Grumley Award for LGBT fiction. As an early employee of the Minnesota AIDS Project, Malloy helped organize the state's first AIDS Walk in 1988 and has remained an engaged member of the community. He received his MFA from the University of Minnesota and currently teaches creative writing in Minneapolis. Visit him at MalloyWriter.com.

Advance praise for Brian Malloy and After Francesco

"After Francesco is a tribute to those who died from AIDS and those who loved them...filled with humor, grief, heartbreak, recovery, the endurance of love, and eventually, hope."
—Saint Paul Pioneer Press

"This novel is fresh, well-observed, often funny, sometimes angry, and always real. I can't think of another novel about the AIDS years that captures that difficult, messy, intense age more accurately or movingly."
—Christopher Bram, author of Eminent Outlaws: The Gay Writers Who Changed America

"In this highly recommended novel, the pain and rage felt by Kevin and those in the trenches with him is palpable and uncomfortable and real. So too is the love and warmth of spirit they manage to nurture in order to survive."
—Library Journal (Starred Review)

“With characters who are flawed and funny, courageous and fearful, Brian Malloy tells a story that could serve as a guidebook on how to love, how to fight for those we love, and how to honor those we've lost without losing ourselves. Beautifully written and infused with a sly humor, After Francesco is a love letter to life.”
—Lorna Landvik, author of Angry Housewives Eating Bon Bons

“Heart-breaking, gut-wrenching, yet somehow also sweet and funny, After Francesco is a must-read for those who survived the AIDS epidemic, those who merely witnessed it, and those who never knew about it but need to know now. Brian Malloy has crafted a universal tale of grief and resilience.”
—Bonnie Kistler, author of House on Fire

“Furious, funny, and beautiful, After Francesco immerses the reader in the crisis of the AIDS epidemic in 1980s in New York. Brian Malloy has created a cast of characters so memorable—so vividly witty and aggrieved and brave and bewildered—you'll never want to put this novel down.”
—Julie Schumacher, author of Dear Committee Members

“This is a character I trust completely as a reader, a character who accesses sharp gallows humor as readily as tears, a character both insecure and brave, a character who effortlessly evokes the 1980s East Village he loves but despises. This book centers around a convincing love story, something uncommon enough, but more than that it’s a book about the strength of friendships that are forged in the face of so many enemies and threats. Honest, sarcastic, bighearted—you'll wish it didn't have to end.”
—John Brandon, author of Further Joy

"A tribute to Malloy's skill."
—The New York Times on THE YEAR OF ICE

"The Year of Ice is a grabber from the get-go. . . . Family dysfunction, honor, and honesty are all major themes, filtered through the limitation's of a teenager's mind-set and handled with deft humor."
—The Minneapolis Star Tribune

"Malloy masterfully blends the page turning plot and brooding atmosphere of neo-noir with an affecting sensitivity to the stuggle for human connection."
—Out on BRENDAN WOLF