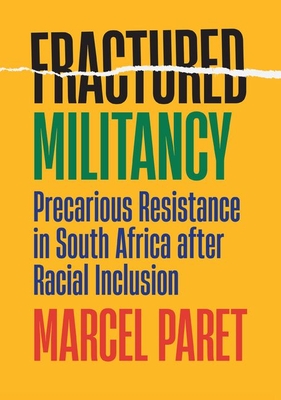 By Marcel Paret
Email or call for price

Drawing on extensive ethnographic fieldwork and interviews with activists, Fractured Militancy tells the story of postapartheid South Africa from the perspective of Johannesburg's impoverished urban Black neighborhoods. Nearly three decades after South Africa's transition from apartheid to democracy, widespread protests and xenophobic attacks suggest that not all is well in the once-celebrated rainbow nation.

Marcel Paret traces rising protests back to the process of democratization and racial inclusion. This process dangled the possibility of change but preserved racial inequality and economic insecurity, prompting residents to use militant protests to express their deep sense of betrayal and to demand recognition and community development. Underscoring remarkable parallels to movements such as Black Lives Matter in the United States, this account attests to an ongoing struggle for Black liberation in the wake of formal racial inclusion.

Rather than unified resistance, however, class struggles within the process of racial inclusion produced a fractured militancy. Revealing the complicated truth behind the celebrated success of South African democratization, Paret uncovers a society divided by wealth, urban geography, nationality, employment, and political views. Fractured Militancy warns of the threat that capitalism and elite class struggles present to social movements and racial justice everywhere.