War on Ivermectin: The Medicine that Saved Millions and Could Have Ended the COVID Pandemic (Hardcover) 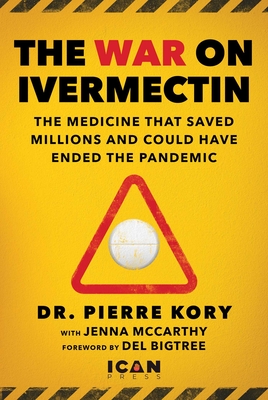 Big Pharma and health agencies cry "Don't take ivermectin!" A media storm follows. Why then, does the science say the opposite?

Ivermectin is a dirty word in the media. The drug has been derided and declared useless. Doctors have earnestly recorded pleas asking those afflicted with COVID-19 not to take the drug. But why?

The War on Ivermectin is the personal and professional narrative of Dr. Pierre Kory, the co-founder of an expert group of physicians’, and his plight to alert the world of his group's identification of ivermectin as a highly-effective, life-saving, widely available generic medicine with an obvious ability to end the global pandemic. In this book, Dr. Kory details all the personal attacks, professional setbacks, and concerted, corrupt, and highly effective actions which influenced the world’s major health agencies and medical journals to dismiss and deny it’s efficacy. Dr. Kory also relates firsthand the catastrophic impacts of mass media censorship and relentless mass media propaganda that he witnessed against ivermectin and his organization's ability to help save lives.

Despite these barriers, Dr. Kory and his colleagues' efforts led to what is now twenty-three countries containing 25 percent of the world's population to have partially or fully adopted ivermectin into their COVID-19 treatment guidelines. Although numerous studies and epidemiologic data have shown that many millions of lives were saved globally with the systematic use of ivermectin, many more millions perished as the result of what he eventually discovered to be the deep, long-standing, pervasive, and corruptive power of the pharmaceutical industry in its decades long-wars on generic medicines. They can't make money on ivermectin like they can on so many other drugs and vaccines, so why would they promote it? Due to Big Pharma's consistent lies and gaslighting about this incredibly effective drug, the war on ivermectin has led to one of the greatest human death tolls in history.

Dr. Pierre Kory is a pulmonary and critical care medicine specialist, and a former associate professor and chief of the Critical Care Service at the University of Wisconsin. Prior to COVID-19, he was an internationally renowned pioneer in the field of critical care ultrasonography, having served as senior editor of an award-winning textbook in its second edition and translated into seven languages, Point of Care Ultrasound. During the  COVID-19 pandemic, he co-founded and serves as the president and chief medical officer of the Front Line COVID-19 Critical Care Alliance, a non-profit organization dedicated to developing the most effective treatment protocols for COVID-19 (flccc.net). Having co-authored over ten peer-reviewed manuscripts on COVID-19, he is considered one of the world’s clinical experts on both the disease and the role of ivermectin and other early treatments. Dr. Kory is also considered a master educator and has won major departmental teaching awards at multiple institutions in his career.