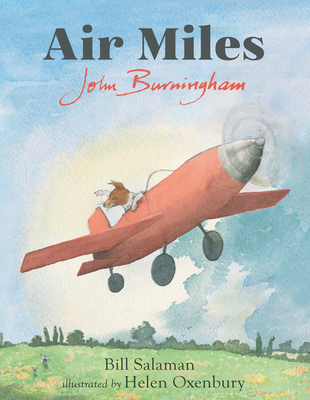 A poignant exploration of love, loss, and possibility, inspired by the last story idea from the legendary John Burningham.

Miles was a difficult dog until he got his own motor car. But now he is growing older, and new challenges are arising. He doesn’t chase balls like he used to. His legs hurt whenever he takes walks. And sometimes he doesn’t hear when Norman calls him. So when Norman learns that Mr. Huddy’s small airplane is in need of a pilot, Miles takes to the skies. In a deeply moving, ultimately uplifting picture book, the star of Motor Miles returns in a story that will resonate with readers who know what it’s like to say goodbye to someone they love. Based on an idea by incomparable picture-book creator John Burningham, the text for Air Miles was completed by his longtime friend Bill Salaman and lovingly illustrated by Helen Oxenbury, John Burningham’s wife.

John Burningham (1936–2019) is one of the world’s most recognized and beloved illustrators. He received two Kate Greenaway Medals and countless other awards, including a Boston Globe–Horn Book Honor for It’s a Secret! Over his fifty-year career, John Burningham wrote and illustrated more than thirty picture books, including Motor Miles, Mouse House, and The Way to the Zoo, and also illustrated the work of other authors, such as Kenneth Grahame and Ian Fleming. A groundbreaking and original storyteller and artist, his books have sold more than 1.5 million copies around the world.

Bill Salaman has enjoyed a varied career as a professional musician, school teacher, university lecturer, inspector of schools, author, and composer. He has also enjoyed a lifelong friendship with Helen Oxenbury and her husband, John Burningham, rejoicing in their remarkable successes over the decades. He now lives in Cambridge, England.

Helen Oxenbury is a two-time winner of the Kate Greenaway Medal and the 2015 Carle Artist Honoree. She is a celebrated illustrator of many well-loved books, including Charley’s First Night and When Charley Met Grampa, both by Amy Hest, Farmer Duck by Martin Waddell, We’re Going on a Bear Hunt by Michael Rosen, and There’s Going to Be a Baby by her husband, John Burningham. Helen Oxenbury lives in London.

Salaman wrote the clear, concise text based on a story idea that Burningham, who died in 2019, had discussed with him. Oxenbury, Burningham’s wife, created the beautiful illustrations in pencil, watercolor, and gouache. Her line drawings sensitively convey the characters’ emotions while the spare text leaves room for viewers to interpret events. A moving picture book.
—Booklist

Left barely begun at his death, Burningham’s second tribute to a beloved Jack Russell terrier is expanded from notes and sketches (the latter smoothly interspersed with Oxenbury’s more finished but equally spare and softly textured watercolors) into a poignant remembrance of the author. . . Goodbye, Mr. Burningham. Thank you for one last grand and memorable flight.
—Kirkus Reviews

Beautiful watercolor and pen illustrations bring Miles and his family to life. . . The text is concise in a way that says more than enough with just the right words, spreading a feeling of peacefulness on every page. . . A breathtaking story about the love and loss of a beloved dog.
—School Library Journal (starred review)