The Best People: Trump's Cabinet and the Siege on Washington (Compact Disc) 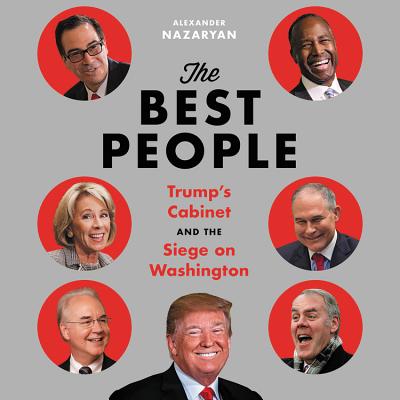 By Alexander Nazaryan, Robert Fass (Read by)
Email or call for price

An in-depth examination of the Trump Cabinet, revealing how, behind the headline-making graft and gaffes, Cabinet secretaries are transforming government, tossing aside tradition, expertise, and norms, with lasting and troubling consequences. As a presidential candidate, Donald Trump claimed he would only hire the best people. It hasn't quite turned out that way. From high-flying former EPA administrator Scott Pruitt, whose penchant for first-class travel and a highly suspect housing arrangement raised Washington's collective eyebrow, to Education Secretary Betsy Devos, who vowed to protect children from potential grizzlies, members of the Trump Cabinet have shown a startling penchant for headline-grabbing behavior. Despite Trump's pledge to drain the swamp, petty corruption abounds. But what's really going on in the executive branch? In The Best People, journalist Alexander Nazaryan takes readers deep inside the Trump government. Nazaryan shows how laughable scandals like Secretary of Housing and Urban Development Ben Carson's attempted purchased of a $31,000 dining set have masked far more important and potentially devastating developments: a coordinated, systematic effort by extreme right-wing Republicans to shred established institutions. Dogged in their conviction that the scope of government (apart from the military) should be reduced, Trump's Cabinet secretaries--many of them smarter than their gaffe-prone personalities might indicate--are dismantling the federal bureaucracy, showing long-term employees the door and gutting regulations. The result is a leaner, dumber government--one that will be far less equipped to protect the interests of regular Americans. The consequences will be felt for decades to come. In the tradition of Fire and Fury and It's Even Worse Than You Think, The Best People will be a riveting, harrowing, and essential read of Trump-era Washington.