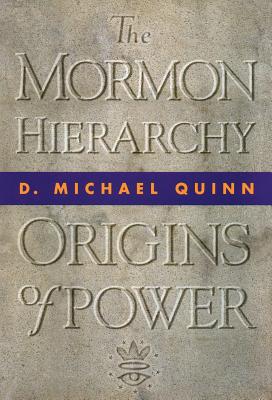 By D. Michael Quinn
Email or call for price

This is book number 1 in the Mormon Hierarchy series.

Converts toJoseph Smith's 1828 restoration of primitive Christianity were attracted to the non-hierarchical nature of the movement. It was precisely because there were no priests, ordinances, or dogma that people joined in such numbers. Smith intended everyone to be a prophet, and anyone who felt called was invited to minister freely without formal office.

Not until seven years later did Mormons first learn that authority had been restored by angels or of the need for a hierarchy mirroring the Pauline model. That same year (1835) a Quorum of Twelve Apostles was organized, but their jurisdiction was limited to areas outside established stakes (dioceses). Stakes were led by a president, who oversaw spiritual development, and by a bishop, who supervised temporal needs.

At Smith's martyrdom in 1844, the church had five leading quorums of authority. The most obvious successor to Smith, Illinois stake president William Marks, opposed the secret rites of polygamy, anointing, endowments, and the clandestine political activity that had characterized the church in Illinois. The secret Council of Fifty had recently ordained Smith as King on Earth and sent ambassadors abroad to form alliances against the United States.

The majority of church members knew nothing of these developments, but they followedBrigham Young, head of the Quorum of the Twelve, who spoke forcefully and moved decisively to eliminate contenders for the presidency. He continued to build on Smith's political and doctrinal innovations and social stratification. Young's twentieth-century legacy is a well-defined structure without the charismatic spontaneity or egalitarian chaos of the early church.

Historian D. Michael Quinn examines the contradictions and confusion of the first two tumultuous decades ofLDS history. He demonstrates how events and doctrines were silently, retroactively inserted into the published form of scriptures and records to smooth out the stormy, haphazard development. The bureaucratization of Mormonism was inevitable, but the manner in which it occurred was unpredictable and will be, for readers, fascinating.

D. Michael Quinn(Ph.D., history, Yale University) is an Affiliated Scholar at the University of Southern California s Center for Feminist Research. He has been a full-time researcher and writer, a professor of history at Brigham Young University, and a visiting professor of history (2002-03) at Yale. His accolades include Best Book awards from the American Historical Association and the Mormon History Association.

His major works include"Early Mormonism and the Magic World View," "Elder Statesman: A Biography of J. Reuben Clark," the two-volume"Mormon Hierarchy"series ("Origins of Power"," ""Extensions of Power"), and"Same-Sex Dynamics among Nineteenth-Century Americans: A Mormon Example."He is the editor of"The New Mormon History: Revisionist Essays on the Past"and a contributor to"American National Biography";"Encyclopedia of New York State";"Fundamentalisms and Society: Reclaiming the Sciences, the Family, and Education"; the"New Encyclopedia of the American West";"Under an Open Sky: Rethinking America s Western Past"; and others.

He has also received honors fellowships and grants from the American Academy of Arts and Sciences, the American Council of Learned Societies, the Henry E. Huntington Library, Indiana-Purdue University, and the National Endowment for the Humanities. In addition, he has been a keynote speaker at the Center for the Study of Religion and American Culture, the Chicago Humanities Symposium, Claremont Graduate University, University of Paris (France), Washington State Historical Society, and elsewhere, and a consultant for television documentaries carried by the Arts and Entertainment Channel, the Canadian Broadcasting Corporation, the History Channel, and the Public Broadcasting Service (PBS)."