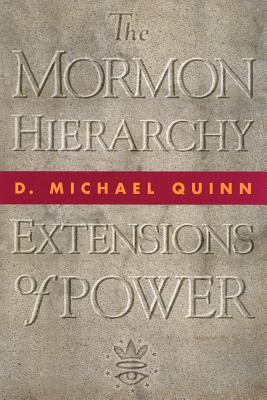 This is book number 2 in the Mormon Hierarchy series.

The Mormon church today is led by an elite group of older men, nearly three-quarters of whom are related to current or past general church authorities. This dynastic hierarchy meets in private; neither its minutes nor the church's finances are available for public review. Members are reassured by public relations spokesmen that all is well and that harmony prevails among these brethren.

But by interviewing former church aides, examining hundreds of diaries, and drawing from his own past experience as an insider within the Latter-day Saint historical department, D. Michael Quinn presents a fuller view. His extensive research documents how the governing apostles, seventies, and presiding bishops are likely to be at loggerheads, as much as united. These strong-willed, independent men like directors of a large corporation or supreme court justices lobby among their colleagues, forge alliances, out-maneuver opponents, and broker compromises.

There is more: clandestine political activities, investigative and punitive actions by church security forces, personal loans from church coffers (later written off as bad debts), and other privileged power-vested activities. Quinn considers the changing role and attitude of the leadership toward visionary experiences, the momentous events which have shaped quorum protocol and doctrine, and day-to-day bureaucratic intrigue from the time of Brigham Young to the dawn of the twenty-first century.

The hierarchy seems at root well-intentioned and even at times aggressive in fulfilling its stated responsibility, which is to expedite the Second Coming. Where they have become convinced that God has spoken, they have set aside personal differences, offered unqualified support, and spoken with a unified voice. This potential for change, when coupled with the tempering effect of competing viewpoints, is something Quinn finds encouraging about Mormonism. But one should not assume that these men are infallible or work in anything approaching uninterrupted unanimity.

D. Michael Quinn(Ph.D., history, Yale University) is an Affiliated Scholar at the University of Southern California s Center for Feminist Research. He has been a full-time researcher and writer, a professor of history at Brigham Young University, and a visiting professor of history (2002-03) at Yale. His accolades include Best Book awards from the American Historical Association and the Mormon History Association.

His major works include"Early Mormonism and the Magic World View," "Elder Statesman: A Biography of J. Reuben Clark," the two-volume"Mormon Hierarchy"series ("Origins of Power"," ""Extensions of Power"), and"Same-Sex Dynamics among Nineteenth-Century Americans: A Mormon Example."He is the editor of"The New Mormon History: Revisionist Essays on the Past"and a contributor to"American National Biography";"Encyclopedia of New York State";"Fundamentalisms and Society: Reclaiming the Sciences, the Family, and Education"; the"New Encyclopedia of the American West";"Under an Open Sky: Rethinking America s Western Past"; and others.

He has also received honors fellowships and grants from the American Academy of Arts and Sciences, the American Council of Learned Societies, the Henry E. Huntington Library, Indiana-Purdue University, and the National Endowment for the Humanities. In addition, he has been a keynote speaker at the Center for the Study of Religion and American Culture, the Chicago Humanities Symposium, Claremont Graduate University, University of Paris (France), Washington State Historical Society, and elsewhere, and a consultant for television documentaries carried by the Arts and Entertainment Channel, the Canadian Broadcasting Corporation, the History Channel, and the Public Broadcasting Service (PBS)."