The Last of the Hill Farms: Echoes of Vermont's Past (Hardcover) 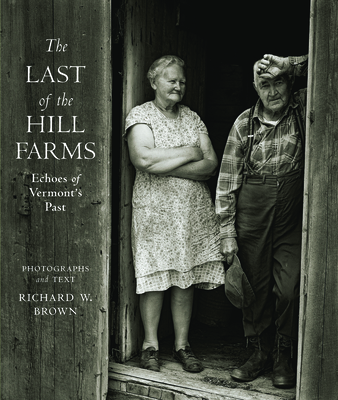 A celebration of a way of life, and the people who lived it, in rural Vermont's Northeast Kingdom. In the early seventies, this was a land of sheep, cattle, work horses, wood-burning stoves, and outhouses--far removed in time and space from the industrial world.
In 1968 the photographer Richard Brown moved to the Northeast Kingdom, a remote corner of Vermont just barely entering the twentieth century. There he encountered a way of life--as it had been lived for generations--that was fast disappearing. A time when a farmer could make a living with a herd of thirty cows with a little sugaring or lumbering on the side.
Brown saw a pastoral vision where, "for the briefest interval, a window opened and the spirit of Vermont's past―granite hills cleared and formed, hard lives lived and lost, struggle and endurance, a harsh land made starkly beautiful by nature and man―was made palpable." He saw the land and also a people whose "endless hours of backbreaking, monotonous work were spent with a quiet ferocity" and who believed their "age-old labors were a struggle waged against time itself--labors that might just hold modernity at bay."
Over the years that followed, Brown did record it, with an 8 x 10″ large plate view camera. Not only the hauntingly beautiful landscape but also the people--grave, strong, resolute--who stayed and worked the stubborn hills and "did so with great but fierce attachment." The images still speak to our own need for attachment, simplicity, and a connection to the land.