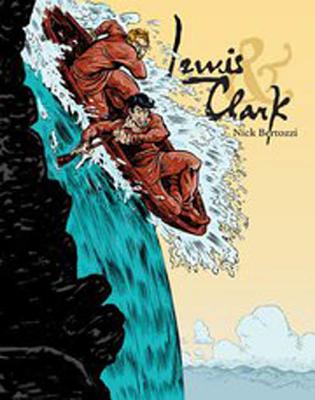 Two of America's greatest explorers embark on the adventure that made their names—and sealed their fates.

In 1804, Meriwether Lewis and William Clark departed St. Louis, Missouri, for one of the greatest adventures this nation has ever known. Appointed and funded by President Jefferson himself, and led by a cadre of experts (including the famous Sacajawea), the expedition was considered a success almost before it had begun. From the start, the journey was plagued with illness, bad luck, unfriendly Indians, Lewis's chronic depression, and, to top it all, the shattering surprise of the towering Rocky Mountains and the continental divide. But despite crippling setbacks, overwhelming doubts, and the bare facts of geography itself, Lewis and Clark made it to the Pacific in 1806.

Nick Bertozzi brings the harrowing—and, at times, hilarious—journey to vivid life on the pages of this oversized black-and-white graphic novel. With his passion for history and his knack for characterization, Bertozzi has made an intimate tale of a great American epic.

Nick Bertozzi lives in Queens, NY, with his wife and daughters and is the author and artist of many other cartoon stories, among them The Salon, Houdini: The Handcuff King, and First Second's Lewis & Clark. He is a teacher at the School of Visual Arts.

Nick Bertozzi lives in Queens, NY, with his wife and daughters and is the author and artist of many other cartoon stories, among them The Salon, Houdini: The Handcuff King, and First Second's Lewis & Clark. He is a teacher at the School of Visual Arts.

“Nick Bertozzi's comics do more than bring history to life: they reanimate these long dead souls and make them human again. I would buy this book just to see Thomas Jefferson tending the roses. But it's dark-locked Meriwether Lewis whom we truly see for the first time through Bertozzi's pen: brave, fallible, ambitious, funny, brilliant, crude, transcendently ambitious, tragically mad all at once. Bertozzi captures in pictures the epic grandeur and quiet desperation of the Lewis and Clark expedition as no dumb book of prose ever could.” —John Hodgman

“Comic books and superhuman feats go hand in glove, and although the opening of the West by the Corps of Discovery might not be everyone's idea of righteous heroism, the cloak-and-tights-worthy daring and physical effort of the explorers is beyond contention. Bertozzi's fictionalized account of Meriwether Lewis and William Clark's expedition is researched with thoroughness and presented so convincingly that, were it not for some episodes and conversations that are clearly unverifiable, this could past as straight-up history. Presumably most readers have been introduced to the expedition by the time they reach middle school, and those with sufficient background will especially appreciate Bertozzi's take on the enmities and alliances among Indian tribes that directly impacted their decision on how to treat the white explorers. Those who know Lewis' sad demise will also laud Bertozzi's imaginative sensitivity to the mental imbalance that presaged his probable suicide. There's a dash of humor to the black-and-white artwork, which generally marches along in orderly frames, only to break into more creative flow when a landmark point or event in the journey is reached. Bertozzi handles silence as cannily as dialogue, and the stretches of mute storytelling will appeal to graphic-novel fans who may not ordinarily pay much mind to historical themes. A few brief exchanges of salty banter push this a bit beyond curricular use in lower grades, but these dashes of spice will make it all the more attractive and authentic to adolescents. A bibliography is appended, and the bound book will include an author's note.” —BCCB

“This important and often retold episode from U.S. history--the scientific exploration, federally supported by President Jefferson, to find a water route from the Missouri to the Pacific--receives an accessible, humorous, and accurate rendering by cartoonist Bertozzi (Houdini: The Handcuff King, 2007). Relying on good research and his own clarified sense of what these historical figures might have felt, Bertozzi shows us Lewis' depressive psyche, Jefferson's devotion to scientific inquiry, Clark's mediation skills, the slave York's self-perception, Sacajawea's role and personal considerations, and the attitudes, fears, and certainties of the general populaces of the exploration party, Native American villages, and white townspeople. The small, black-and-white panels provide clear and action-packed detail as well as insightful poses and facial expressions. The different languages being spoken and even hand signs are creatively distinguished by different balloon outlines. An excellent supporting choice for the American history curriculum and a fun and edifying read in itself. -- Booklist With masterful command, Bertozzi offers an innovative take on Meriwether Lewis and William Clark's epic journey in this oversized graphic offering. Portraying the arduous trek through rough terrain and encounters with often unwelcoming natives, sequential panels transport readers alongside the famous duo and their equally renowned translator, Sacagawea, as they travel from St. Louis to the Pacific coast. Within a fictional framework, the narrative weaves in facets of the characters' personalities, including Lewis's tempestuous melancholy, Charbonneau's inept bumbling and Sacagawea's ability to endure this voyage surrounded by her intensely masculine cohorts. The artist soars with his exquisite eye for page layouts; his deft stylings can make otherwise dry passages come alive through clever panel placement and visual novelty. Pair with George O'Connor's Journey into Mohawk Country (2006) and Scott Chantler's Northwest Passage (2007) for a graphically hearty helping of fine historical readings. Slated to be the first in a series on explorers, this expedition ends with high hopes for subsequent volumes.” —Kirkus, Starred Review