Just So: An Odyssey Into the Cosmic Web of Connection, Play, and True Pleasure (CD-Audio) 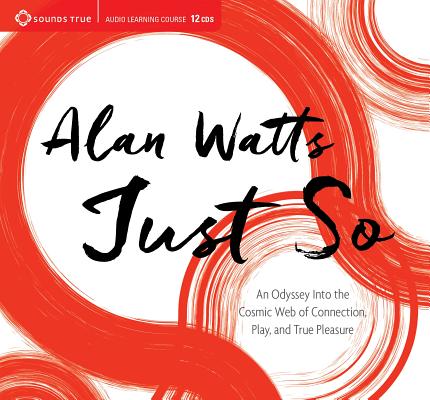 By Alan Watts
Email or call for price

If you were God," asked Alan Watts, "what kind of universe would you create? A perfect one free of suffering and drama? Or one filled with surprise and delight?"

With Just So, the celebrated philosopher and self-described "spiritual entertainer" invites us to explore the hidden dimensions that shape both the cosmos and our personal experience of it.

From the 1950s to the 1970s, Eastern spiritual philosophies ignited in the West profound new ways of perceiving ourselves and the mysteries of life. And from the beginning, Alan Watts was at the forefront—sparking insight after insight at live gatherings and radio broadcasts. Today, Alan Watts’ books and recordings bring perennial delight to new readers and listeners of all ages and beliefs.

The Cosmic Network—a journey into the interconnected web of the personal and the infinite
Ecological Awareness—reflections on how humanity and nature evolve through discovery and "purposeless" play
The Pursuit of Pleasure—how a true materialism connects us fully through our senses with others and to the natural flow of the cosmos.

Along the way, you’ll explore many other themes, at turns humorous, prophetic, and more relevant today than ever. What unfolds is a liberating view of life that arises from possibility and the unpredictable—perfect and "just so" not in spite of its messy imperfections, but because of them.