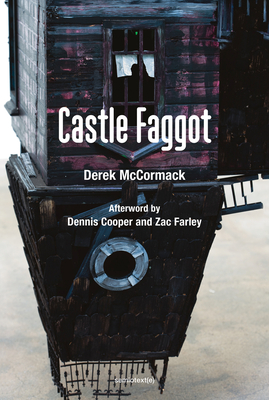 A dark satire about an amusement park more deranged than anything Disney could imagine: a playland for gay men called Faggotland.

Castle Faggot is Derek McCormack's darkest and most delicious book yet, a satire of sugary cereals and Saturday morning cartoons set in an amusement park more deranged than anything Disney dreamed up. At the heart of the park is Faggotland, a playland for gay men, and Castle Faggot, the darkest dark ride in the world. Home to a cartoon Dracula called Count Choc-o-log, the castle is decorated with the corpses of gays—some were killed, some killed themselves, all ended up as décor.

The book includes a map of Faggotland, a photobook of the castle, the instructions for a castle-shaped dollhouse, and the novelization of a TV puppet show about Count Choc-o-log and his friends—reminiscent of the classic stop-motion special Rudolph the Red-Nosed Reindeer, but even gayer and more grotesque. As scatological as Sade but with a Hanna-Barbera vibe, Castle Faggot transmutes McCormack's love of the lurid and the childlike, of funhouses and sickhouses, into something furiously funny: as Edmund White says, “the mystery of objects, the lyricism of neglected lives, the menace and nostalgia of the past—these are all ingredients in this weird and beautiful parallel universe.”

Derek McCormack is a writer who lives in Toronto. His previous books include The Show that Smells and The Well-Dressed Wound (Semiotext(e)).

"In Derek McCormack’s home province, farm boys with growing pains enjoy a little-known meal called bed-supper—a hearty bowl of sweet breakfast cereal enjoyed as a midnight snack. Here McCormack has composed a peculiarly salacious bed-supper, where the long secret sweet-tooth of the Marquis de Sade glints as it sinks into the dirtiest of dishes. This useful book will more than stay your appetite until breakfast—Castle Faggot is also a manual of redecoration, a musical, a puppet show, a theory of cosmetics, a work of poetics, and a glorious celebration of the French decadence."—Lisa Robertson, author of The Baudelaire Fractal

"It is really just one of the best books ever, and maybe the greatest novel ever written."—Dennis Cooper, author of The Marbled Swarm