Ghosts of Science Past (Hardcover) 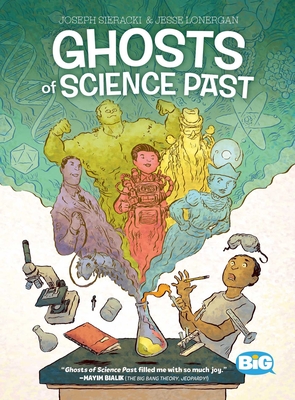 A teenager desperate to pass his Biology final is visited in the night, Christmas Carol-style, by the spirits of some of the greatest scientists in history.

Trevor suffers from an ailment common among high schoolers: apathy. He snoozes through science class, distrusts his teachers, and would rather stay up all night playing video games than studying for his upcoming science quiz. With an “F” in Biology looming ominously in Trevor’s near future unless he finds motivation, Trevor’s parents take away his video games for a week in an effort to make him buckle down and study. When he opens up his book, however, an epic adventure begins, and the greatest scientists in history become his guides—literally!

Joseph Sieracki was born and raised in Cleveland, Ohio. His work includes A LETTER TO JO published by TOP SHELF and THE LIFE AND DEATH OF THE BRAVE CAPTAIN SUAVE from SCOUT COMICS. He is currently teaching Science in a suburb of Cleveland, where he resides with his wife and kids.

Jesse Lonergan was born in California, raised in Saudi Arabia and Vermont, and spent two years in Turkmenistan with the Peace Corps. His comics include ALL STAR, PLANET PARADISE, and HEDRA, which was nominated for an Eisner. When he gets really excited or thinks something is really funny, he rubs his hands together like a villain in a cartoon.