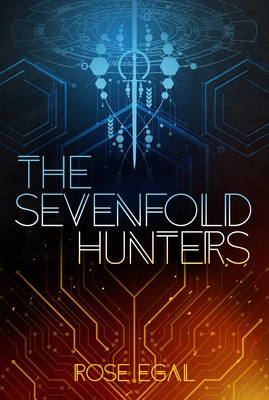 There’s nothing hijabi alien hunter Abyan wants more than to graduate from Carlisle Academy and finally rid the Earth of aliens, the Nosaru.

Everything is going to plan until the Nosaru kill one of Abyan’s squad mates. To make matters worse, the school admins replace her elite squad member with a sub-par new recruit, Artemis. Despite Artemis failing every test—and bringing the team down with her—their cutthroat instructors refuse to kick her out.

Together Abyan, Artemis and the rest of the team unravel the mystery of why Artemis is actually there, what the Nosaru really want, and what Carlisle Academy has been hiding from them all.

Rose Egal loves autumn, sad poetry, and cats who humble themselves. The Sevenfold Hunters is her first novel in part inspired by her MS in Biochemistry from Queen Mary University of London. She lives in London with her family and their cat, her arch nemesis, Hercules Aethelstan Buni Massimo Pandemicus The not Great.

"A must for teen fans of Ms. Marvel—the graphic novels or the television series."
—Booklist

"Part sci-fi horror, part twisty thriller, Egal's debut is packed with fascinating mysteries, shadowy organizations, and a found family of characters you'll fall in love with. I never knew how much I needed space vampires in my life!"
—Rebecca Coffindaffer, author of the Crownchasers duology

“Through dual POVs, Rose Egal’s masterful debut shows readers what makes sci-fi fresh and iconic. Whether it’s fighting parasitic aliens, exploring the insidious relationship between privilege, academia, and corporate power, or untangling threads that could lead to truths they’re not ready for, Egal makes us cheer for the Sevenfold at every dangerous turn.”
—Amparo Ortiz, author of Blazewrath Games

“Compelling, suspenseful, and truly unique, The Sevenfold Hunters will have you on the edge of your seat. I can't wait to read what she writes next!”
—Alechia Dow, author of The Kindred

“Packed with fierce friendships and thrilling action, The Sevenfold Hunters is a delightful mix of elite academy intrigue and good-old-fashioned vampire hunting with a sci-fi twist.”
— Emily Skrutskie, author of Bonds of Brass