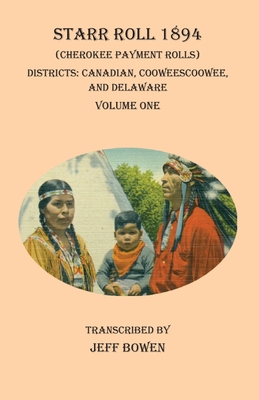 By Jeff Bowen (Transcribed by)
Email or call for price

The Starr Roll, 1894 (Cherokee Payment Rolls and Index) is found in the National Archives film 7RA38, Rolls 2-5, under the heading Record Group 75. The rolls or lists were compiled by Ezekiel Eugene Starr (1849-1905), a Cherokee Senator for the Flint District in 1883 and then Treasurer for the Western Cherokee Nation in 1891. The background to the Starr Roll requires some telling. On March 3, 1893, Congress passed an act that authorized the sale of lands west of the Cherokee Nation lands known as the Cherokee Outlet, and later referred to as the 1894 Cherokee Strip Payment. Originally created by agreement with the Eastern Cherokee in 1835, the Cherokee Outlet occupied a strip of land fifty-seven miles wide in present-day northern/northwestern Oklahoma and was intended as a "perpetual outlet west" for the Cherokee. After 1877 the Cherokee National leased the Outlet to the Cherokee Strip Livestock Association, who desired it for its rich grazing lands. Then, in 1893, homesteaders were permitted to stake their claims to this land in the fourth and largest of Oklahoma's five land runs. In return for opening the Cherokee Outlet to white settlers, eligible members of the Cherokee National were paid the per-capita sum of $365.70.

E.E. Starr, then Cherokee Treasurer, created the receipt roll for these payments. He arranged the roll by each of the nine Cherokee Districts, and thereunder by each party's enrollment number. The contents of the receipt roll, transcribed for this volume (the first in a series), includes the name of the head of household, names of other household members, name of person receiving the payment, and name of a person who witnessed the transaction of record. The Starr Roll also includes an Orphans Roll and Supplemental, the contents of which are self-explanatory within this transcription. In all, this transcription of the first volume of the Starr Roll, 1894 refers to 14,000 persons impacted by the Cherokee Strip Payment.