Prince: Before the Rain (Hardcover) 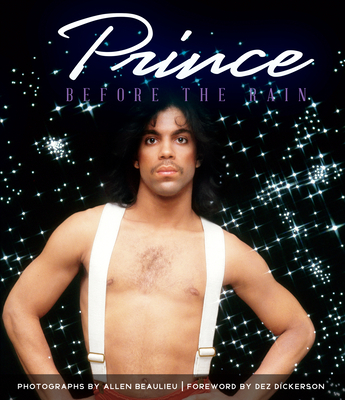 Photographer Allen Beaulieu worked with Prince from the late 1970s into the early '80s, capturing the musician's progression from rising star to his ultimate purple superstardom. Always at Prince's side with camera in hand, Beaulieu helped Prince carry forward his vision with legendary album cover images and promotional photos during the groundbreaking Dirty Mind, Controversy, and 1999 era, while also capturing live performances on tour with Prince. Prince: Before the Rain puts into focus the hallmark imagery--including behind-the-scenes, candid, and casual shots--with recollections from Beaulieu on his personal and professional relationship with Prince. Accomnpanying text will take the readers deeper into the context of these crucial years, with reminiscences from former bandmates, including Bobby Z., Dez Dickerson, Andr Cymone, and more. Prince: Before the Rain paints another important picture in the mythology of the celebrated, influential, and endlessly invigorating performer while providing an intimate portrait of the Minnesota artist about to take over the world.

Allen Beaulieu was Prince's photographer and friend beginning in the late 1970s. He photographed three album covers and toured extensively with the artist. Dez Dickerson is a guitarist, singer, songwriter, producer, and record executive and was a member of the Revolution with Prince from 1978 to 1984. He currently runs Pavilion Synergies, a social marketing and music entertainment company. Jim Walsh is a writer, columnist, journalist, and songwriter from Minneapolis and writer of the liner notes for the 1995 Prince album The Gold Experience and author of The Gold Experience: Following Prince in the '90s. Eloy Lasanta has carved out a niche for himself as a Prince Rogers Nelson historian in the world of music fandoms. As YouTuber Prince's Friend, he is aligned with the mission of keeping Prince's legacy alive.