Total Chaos: The Story of the Stooges as Told by Iggy Pop / Updated and Revised (Paperback) 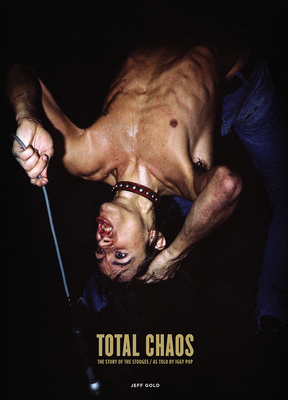 TOTAL CHAOS: The Story of The Stooges / As Told by Iggy Pop is the first time the story of this seminal band has been told entirely in Pop's own words. Hundreds of full color rare photos illustrate Pop's story. Author Jeff Gold and contributor Johan Kugelberg, noted music historians and collectors, spent two days with Pop at his Miami home, sharing with him their extensive Stooges collection and interviewing the legendary singer. Pop's candid, bare-all responses left them with the almost unbelievable tale of the band he founded-the alternately tragic and triumphant story of a group who rose from youth, fell prey to drugs, alcohol, and music biz realities, collapsed and nearly 30 years later reformed, recording and touring to great acclaim. In 2010 The Stooges, credited with having invented punk rock, were inducted into the Rock & Roll Hall of Fame. Their continuing influence can be felt today in the shape and sound of rock-n-roll music.

"Gasp at the awe inspiring memorabilia and frank talk in Total Chaos: The Story of The Stooges/As Told By Iggy Pop"-- Mojo Magazine

"A fantastic new book...a must-read for both diehard fans and anyone who wants to learn first-hand from Pop what it was like from the inside looking out in one of the seminal bands of the post-'60s era."-- Esquire

Iggy Pop, born James Newell Osterberg, Jr (April 21, 1947), is an American musician and actor. He was the vocalist for, and is the last remaining original member of The Stooges, a band Rolling Stone lists in their 100 greatest artists of all time. The Stooges were first active 1967-1975, reunited in 2003, and in 2010 were inducted into the Rock and Roll Hall of Fame. Jeff Gold is a collector, dealer, label executive and music historian. Rolling Stone profiled him as one of the "top collectors of high-end music memorabilia. He has consulted for the Rock & Roll Hall of Fame and PBS. He won the Best Album Package Grammy for Suzanne Vega's Days of Open Hand. Jon Savage is the award winning author of England's Dreaming: Sex Pistols and Punk Rock He has written sleeve notes for Wire and the Pet Shop Boys, among others His most recent book is 1966: The Year the Decade Exploded (Faber and Faber 2015). Dave Grohl is a song-writer, a multi-instrumentalist and the founder and frontman of the Foo Fighters. Between 1990-94 he was the drummer in Nirvana - all through their spectacular success - and has since worked with David Bowie, Paul McCartney, and Iggy Pop among others. His film work includes a director's credit on the 2013 documentary feature, "Sound City". He was inducted into the Rock and Roll Hall of Fame in 2014. Joan Jett is an American rock guitarist, singer, songwriter, producer and occasional actress, best known for her work with Joan Jett & the Blackhearts, preceded by success with The Runaways, including their hit song Cherry Bomb Johan Kugelberg was awarded the ForeWord Silver Medal for Music in 2010 for his book The Velvet Underground - New York Art. He was also nominated for the NYPL Books for the Teen Age award in 2008 for Born In The Bronx. His work has been featured in The New York Times, Rolling Stone, and the BBC. Johnny Marr was a founding member of The Smiths (1982-1987). He has also played with The Pretenders (1987-89), The The (1988-93), Electronic (1988-?) Modest Mouse (2005-08) and The Cribs (2008-?) and his own group, The Healers. Marr has been awarded the Q Magazine lifetime achievement award, the Mojo Classic Songwriters Awards, and also the Inspiration Award at the 55th Ivor Novello Awards held at Grosvenor House London. Jack White is a songwriter, guitarist and co-founder of the White Stripes. His subsequent groups include the Raconteurs and The Dead Weather: he has also released two solo albums. He founded Third Man Records in 2001 and Third Man Books in 2014. His most recent studio album is Lazaretto.