The Big Fella: The Rise and Rise of BHP Billiton (Paperback) 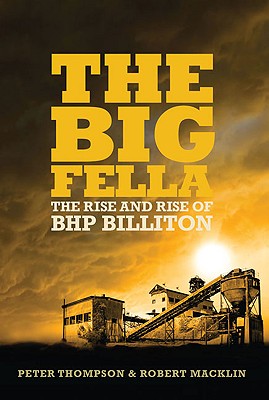 By Peter Thompson, Robert Macklin
Email or call for price

BHP is part of Australia's DNA; but it remains an enigma. The Big Fella is the compelling story of how BHP and its partner Billiton rose from the humblest beginnings in the Australian Outback and on the Indonesian island of Belitung to starry heights on the great stock exchanges of the world. Based on more than 60 exclusive interviews, it rips away the superficial gloss to expose the political and industrial forces that really drive Big Business in the 21st century. In an investigative tour de force, authors Peter Thompson and Robert Macklin reveal the visions, the schemes, the scandals and the corporate life-and-death struggles that have characterized BHP's evolution from the first lucky strike by the mysterious Charles Rasp at Broken Hill in 1883 to its merger with Billiton in 2001 to its daring $150 billion bid for Rio Tinto six years later. The result is a gripping story of foresight and blunder, of nation-building and rampant ego, of greed and of grace, written by two master storytellers with, for the first time, access to the key players themselves.

Peter Thompson turned to full time writing following a 20-year career as a Fleet Street journalist in which he rose to night editor and deputy editor of the Daily Mirror and editor of the Sunday Mirror. His most recent book is Pacific Fury. Robert Macklin wrote for the leading Australian newspapers and The Bulletin magazine. His most recent book is a biography of Kevin Rudd. They have written some 25 books between them total, including four titles as co-authors.