Breathe, You Are Alive: The Sutra on the Full Awareness of Breathing (Paperback) 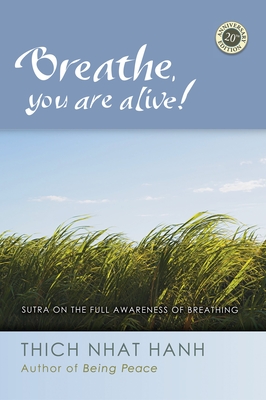 According to the Buddha’s teaching in the Anapanasati Sutra, maintaining awareness of our breathing is a means of awakening to the true nature of all things and arriving at spiritual liberation. Breathe, You Are Alive outlines 16 exercises of conscious breathing that were taught by the Buddha, together with commentaries and further exercises for practicing them every day and in any situation. Thich Nhat Hanh’s insights and explanation give the reader access to the profound nourishment available when we slow down and get in touch with our in-breath and out-breath. He walks the reader through the progression of exercises—from awareness of the physical plane, to the mental and spiritual planes—in a clear and concise manner that is easy to implement.

This 20th anniversary edition includes Thich Nhat Hanh’s most recent commentaries and practices on the awareness of breathing meditation, as well as his "Breathing and Walking" Gatha (practice verse) set to music.

THICH NHAT HANH is one of the most revered and influential spiritual teachers in the world today. Born in Vietnam in 1926, he became a Zen Buddhist monk at the age of sixteen. Over seven decades of teaching, he has published more than 100 books, which have sold more than five million copies in the United States alone. Exiled from Vietnam in 1966 for promoting peace, his teachings on Buddhism as a path to social and political transformation are responsible for bringing mindfulness to the West. In 1982 he established the international Plum Village Community of Engaged Buddhism in France, now the largest Buddhist monastery in Europe. He lives in Hue in Central Vietnam.