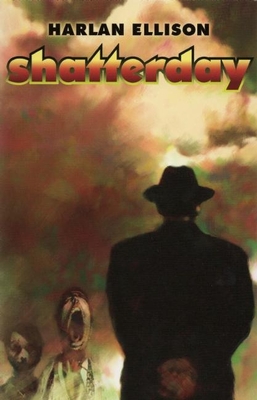 By Harlan Ellison
$14.95
Email or call for price

Shatterday is a revolutionary classic from Harlan Ellison, science fiction's most controversial author. This collection of sixteen visionary stories remains as scathing and influential today as when it was initially published. Read as fanatically by intellectuals as by college students, these category-defying stories combine ironic humor, sardonic social criticism, and intense self-revelation; from ?Jeffty Is Five," the tragedy of an innocent child wrenched out of an idyllic past, to humanity's encounter with dangerously seductive aliens in ?How's the Night Life on Cissalda?", culminating in ?Shatterday," the dark allegory of an identity-stealing doppelganger replacing his inferior twin. Back in print for the first time since its stunning debut in the early 1980s, this incendiary collection reestablishes its legendary author at the cutting-edge of the short-story form.

Harlan Ellison has written or edited more than 75 books and more than 1,700 stories, essays, articles, and newspaper columns as well as two dozen teleplays and a dozen movies. His work includes such classics as Deathbird Stories, Dangerous Visions, I Have No Mouth and I Must Scream, Strangewine, Shatterday, Angry Candy, and Slippage. He has won multiple Hugo, Nebula, Edgar, Stoker, Locus, and Audie awards as well as the Silver Pen, World Fantasy, British Fantasy, Bradbury, and American Mystery awards. Ellison was nominated for a Grammy award in 2009 for his reading of Through the Looking-Glass and What Alice Found There.

"The spellbinding quality of a great nonstop talker, with a cultural warehouse for a mind."  The New York Times Book Review

"Ellison, that feisty, unreasonable, prevaricating, megalomaniacal, and revanchist monster [is] the quintessential science fiction short story writer of his time."  Magazine of Fantasy and Science Fiction

"One of the greatest speculative fiction writers this country has ever produced."  Ron Moore, executive producer, Battlestar Galactica

"Speculative fiction without Harlan Ellison would be like the Fourth of July without fireworks."  Ursula K. Le Guin, author, The Left Hand of Darkness

"You have to read Shatterday, feel it, experience it. It is an event."  Science Fiction Review

"Timeless stuff, speaking to (mostly) the dark within each of us, but also at times uplifting, light, and funny."  SFScop.com

"Confrontational and shocking . . . you'll remember again why Harlan Ellison is considered one of America's best short story writers."  The Magazine of Fantasy and Science Fiction