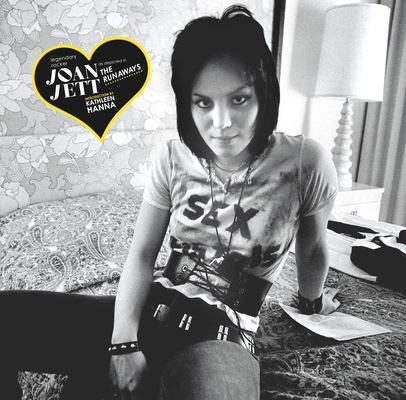 By Todd Oldham, Kathleen Hanna (Introduction by)
$24.95
Email or call for price

Rock-and-roll goddess Joan Jett holds a beloved place in the world of music. She started her first band, The Runaways, at age fifteen and has blazed a trail that has inspired and thrilled her fans to this day. AMMO Books is proud to release this authorized, loving tribute conceived and authored by designer Todd Oldham. The book chronicles all aspects of her career and passions through images--from forming The Runaways to her years of touring with her band, Joan Jett and the Blackhearts. JOAN JETT features many never-before-seen photos, ephemera, and excerpts from thirty years worth of interviews, carefully curated with Joan herself, covering the multi-decade career of a real rock-and-roll icon. A thoughtful introduction written by renowned indie rocker and Riot Grrrl Kathleen Hanna brings context to this exciting title.

Joan Jett is a revered songwriter, musician, and American icon. In keeping with her pioneering spirit, she went on to be the first woman to start her own independent rock label, Blackheart Records. The Joan Jett and the Blackhearts Greatest Hits compilation was released in March 2010, and a film based on The Runaways starring Dakota Fanning, and Kristen Stewart as Joan Jett will be released on DVD in July 2010.

Distinguished as an innovator of accessible design, Todd Oldham is the founder of Todd Oldham Studio, a full-service design firm. Originally a New York fashion designer and host on MTV's "House of Style," Todd's career has evolved to include all areas of design, from interior design, film and photography, to furniture, graphic art and product design. Todd is also the author of several books, including "Charley Harper: An Illustrated Life," "Wayne White," "Kid Made Modern," "Hand Made Modern," and "Joan Jett."

"Be thankful young Joan Jett didn't take to the clarinet. And be thankful to her parents for buying a cheap Silvertone guitar that would inspire her to rock away her hormones with her all-girl punk outfit, the Runaways, in the 1970s and rule the charts in the 80s with the Blackhearts and other bands." —Vanity Fair

"Before we even dropped it onto our coffee table to see how it looked there, we flipped through to see the sweet pictures of Jett that comprise most of the book." —New York Magazine

"While it's a look into the life of a rock and roll goddess, it's simultaneously a celebration of women, and not in that Indigo-girls-drum-circle, revolutionize-your-life-by-abandoning-crucial-habits-of-personal-hygiene kind of way." —Juxtapoz Magazine

"Joan Jett really doesn't need to give a damn about her reputation; with a seminal band, a slew of hit singles, and now a movie and a book under her belt, she's one of rock'n'roll's most iconic figures." —Nylon Magazine