Everything Begins & Ends at the Kentucky Club (Paperback) 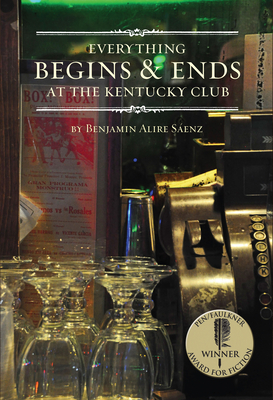 By Benjamin Alire Sáenz
$19.95
Email or call for price

Sometimes the border is a mirror, sometimes an escape, and sometimes it's just the bridge you cross to go home.

Benjamin Alire S enz's stories reveal how all borders--real, imagined, sexual, human, the line between dark and light, addict and straight--entangle those who live on either side. Take, for instance, the Kentucky Club on Avenida Ju rez two blocks south of the Rio Grande. It's a touchstone for each of S enz's stories. His characters walk by, they might go in for a drink or to score, or they might just stay there for a while and let their story be told. S enz knows that the Kentucky Club, like special watering holes in all cities, is the contrary to borders. It welcomes Spanish and English, Mexicans and gringos, poor and rich, gay and straight, drug addicts and drunks, laughter and sadness, and even despair. It's a place of rich history and good drinks and cold beer and a long polished mahogany bar. Some days it smells like piss. I'm going home to the other side. That's a strange statement, but you hear it all the time at the Kentucky Club.

"Sáenz's moving collection of short stories hinges on the intergenerational clientele of the titular borderland watering hole just south of the U.S.-Mexican divide on Avenida Juárezthere's much to enjoy in these gritty, heartfelt stories. Publishers Weekly

"Seven excellent stories [by] a versatile writer Sàenz writes prose that is tender, occasionally fierce, and always engaging. Read every word of his stories lest you miss some clever twist, some subtle irony, some gentle nuance of poetic imagery that he has labored to create." Booklist

"Though the prolific Benjamin Alire Sáenz has been writing books in every genre for the past two decades, Everything Begins and Ends at the Kentucky Club is only his second short-story collection. But the wait was definitely worth it [The story "He Has Gone to Be with the Women"] is nothing short of a masterpiece In one story, a school counselor says the following about his troubled charges: "They came to me with a thirst in their eyes, a thirst, such a thirst and I knew that I could never give them the rain they deserved, the rain they so desperately needed." That might as well be The Kentucky Club speaking, since every protagonist in this heartbreaking collection of stories finds his way to a confession stool at the bar. They find no solutions to their ills, just a sensitive ear that has heard it all before but is willing to listen once again." Rigoberto González, former president of the executive board of directors of the National Book Critics Circle, special to the El Paso Times