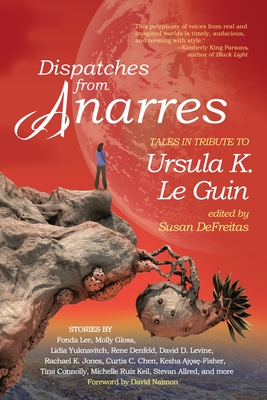 Named for the anarchist utopia in Ursula K. Le Guin's science fiction classic The Dispossessed, Dispatches from Anarres embodies the anarchic spirit of Le Guin's hometown of Portland, Oregon, while paying tribute to her enduring vision. In stories that range from fantasy to sci fi to realism, some of Portland's most vital voices have come together to celebrate Le Guin's lasting legacy and influence on that most subversive of human faculties: the imagination. Fonda Lee's "Old Souls" explores the role of violence and redemption across time and space; Rachael K. Jones's "The Night Bazaar for Women Turning into Reptiles" touches on gender oppression and a woman's right to choose; Molly Gloss's "Wenonah's Gift" imagines coming-of-age in a post-collapse culture determined to avoid past wrongs; and Lidia Yuknavitch's "Neuron" reveals that fairy tales may, in fact, be the best way to understand the paradoxes of science. Other contributors include Curtis Chen, Kesha Ajọsẹ-Fisher, Juhea Kim, Tina Connolly, David D. Levine, Leni Zumas, Rene Denfeld, and Michelle Ruiz Keil, with a foreword by David Naimon, co-author (with Le Guin) of Ursula K. Le Guin: Conversations on Writing.

An American of Indo-Guyanese descent, Susan DeFreitas is the author of the novel Hot Season, which won a Gold IPPY Award; her work has been featured in the Writer's Chronicle, Story magazine, Daily Science Fiction, Portland Monthly, and High Desert Journal, among other numerous other journals and anthologies. As an independent editor and book coach, she specializes in helping writers from historically marginalized backgrounds, and those writing socially engaged fiction, break through into publishing. She divides her time between Santa Fe, New Mexico, and Portland, Oregon.