Abraham Lincoln Was a Liberal, Jefferson Davis Was a Conservative: The Missing Key to Understanding the American Civil War (Paperback) 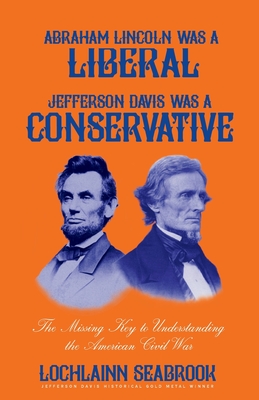 By Lochlainn Seabrook
Email or call for price

The mainstream version of the American Civil War has always been nonsensical and irrational. Why? Because it was written by Liberals with an extreme anti-South bias and little or no knowledge of the history of America's two party system. For example, if the Confederacy's Democratic leaders were truly "Liberals," as we've been taught, why did they maintain that they were fighting for the Constitution, a document that Liberals have traditionally treated with scorn and derision? And why, if the Union's Republican leaders were truly "Conservatives," as we've also been taught, did they claim to be fighting to force the Southern states back into the Union, a Union our Conservative Founding Fathers purposefully designed to be "voluntary"?

In this fascinating one-of-a-kind book, Abraham Lincoln Was a Liberal, Jefferson Davis Was a Conservative: The Missing Key to Understanding the American Civil War, the author, award-winning Civil War scholar and unreconstructed Southern historian Colonel Lochlainn Seabrook, answers these and scores of other related questions in clear and concise language.

As Colonel Seabrook explains, what the public and even many authorities don't realize is that in the 1860s the platforms of the two main political parties were the reverse of what they are today. In other words, at the time, big government advocate Lincoln and the Republican Party were Liberals, while small government proponent Davis and the Democratic Party were Conservatives. This simple fact transforms the American Civil War from what pro-North writers disingenuously assert was a battle over abolition and slavery, to what it really was. A massive and bloody contest between Northern liberalism and Southern conservatism

The author provides over 600 notes, a 1,000 book bibliography, and hundreds of contemporary eyewitness statements to further establish what was well-known up until the early 20th Century, but which since then has been suppressed by Liberals and forgotten by Conservatives. Profusely illustrated with hundreds of 19th-Century photographs and campaign posters, Colonel Seabrook's book covers the entire history of America's two-party system, as well as all 58 of our quadrennial elections and all 45 of our presidents, from George Washington to Donald Trump. He gives special attention to the U.S. elections between 1828 and 1896, when party names and platforms changed, making, as he does so well, an exceedingly complex subject entirely understandable to the layperson and academic alike. His four appendices supply helpful lists and charts, allowing the reader to view the theme from different angles.

Abraham Lincoln Was a Liberal, Jefferson Davis Was a Conservative will forever alter the way you view America's Great War, bringing clarity to and reviving interest in a subject most people considered antiquated - but which turns out to be more relevant now than ever before Learn for yourself why the Democratic Party of the 1860s was the Republican Party of today, and why the Republican Party of the 1860s was the Democratic Party of today. Find out firsthand why modern Republicans should be honoring Davis and waving the Confederate Flag, and why Lincoln's name should never be associated with conservativism, only with liberalism and socialism. The companion volume to Colonel Seabrook's work, Lincoln's War: The Real Cause, the Real Winner, the Real Loser, this is the first and only book of its kind ever written on this specific topic. Instantly destroys the many anti-South Civil War myths fabricated by the Left Available in paperback and hardcover.

Civil War scholar Colonel Lochlainn Seabrook is one of the most prolific, popular, and important writer-historians in the world today.