Far Flung: Improvisations on National Parks, Driving to Russia, Not Marrying a Ranger, the Language of Heartbreak, and Other Natural Disasters (In Place) (Paperback) 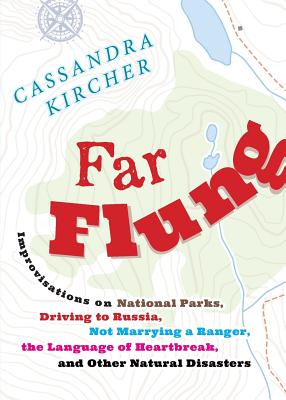 By Cassandra Kircher
$19.99
On Our Shelves Now

Cassandra Kircher was in her twenties when she was hired by the National Park Service, landing a life that allowed her to reinvent herself. For four years she collected entrance fees and worked in the dispatch office before being assigned as the first woman to patrol an isolated backcountry district of Colorado’s Rocky Mountain National Park. There, Kircher encountered wonder and beauty, accidents and death. Although she always suspected the mountains might captivate her, she didn’t realize that her adopted landscape would give her strength to confront where she was from—both the Midwest that Willa Cather fans will recognize, and a childhood filled with problems and secrets.

Divided and defined by geographic and psychological space, Far Flung begins in the Rockies but broadens its focus as Kircher negotiates places as distant as Alaska’s Kenai Peninsula, Russia’s Siberian valleys, and Wisconsin’s lake country, always with Colorado as a heartfelt pivot. These thirteen essays depict a woman coming to terms with her adoration for the wilds of the West and will resonate with all of us longing to better understand ourselves and our relationships to the places and people we love most.

Cassandra Kircher is a professor of English at Elon University. She studied nonfiction at the University of Iowa, and her essays have received awards including a Pushcart nomination and Best American Essays citation. She was the first woman stationed in Rocky Mountain National Park’s remote North Fork subdistrict.

"In a voice as clear and compelling as a tumbling mountain stream, Cassandra Kircher writes of family, landscape, and the deep and sometimes mystical ways in which we are bound to the land and bound to each other. This book is an intimate, meditative journey into the human heart, with no shortage of adventures along the way."
Kristen Iversen, author of Full Body Burden: Growing up in the Nuclear Shadow of Rocky Flats

"Intimate and moving essays on nature, family, and adventures in the wild."
Foreword Reviews