The Bhagavad Gita: The Interrelation Between Art Worlds (Paperback) 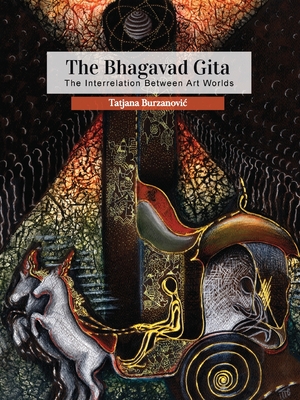 By Tatjana Burzanovic
Email or call for price

"The Bhagavad Gita, The Interrelation Between Art Worlds" by Dr.Tatjana Burzanovic amazes readers with unique artistic depictions of the great Hindu epic, The Bhagavad Gita. Thrilled by the messages of the Gita, the author has made beautiful paintings in a way that one can simply read, think, and feel what was told by Shri Krishna. Her paintings are a philosophical play of composition, color, contrast, third dimension, structure, texture, proportion, rhythm, and dynamics. Described is also the analogy between temporal and spatial arts, such as color (valeur), music (chord).

The author has been awarded "Best Equipped Art Edition" for this work on the Gita at the 11th International Podgorica Book Fair, Montenegro. She was also awarded a Doctorate for her work on her interpretations of the Gita. The book covers all the eighteen chapters of the Gita while conveying the philosophy of life, meaning, purpose, and fulfilment. There are two versions of paintings for each chapter to touch deeper meanings of each chapter of the Gita. This work on the Gita has been widely acknowledged in several countries including India.

"The most beautiful, perhaps the only true philosophical song existing in any known tongue, perhaps the deepest and loftiest thing the world has to show," said Wilhelm von Humboldt about the Gita.

A. Schopenhauer, a German philosopher, said about the Gita, "This is the most instructive and most exalted reading in the world; it was a comfort to my life and will be consolation to my death."