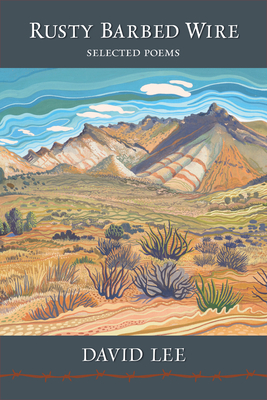 David Lee is a major figure in American letters: the author of fifteen books of poetry, a celebrated teacher, a legendary reader in classrooms, bookstores, and taverns; and the first poet laureate of Utah. His work is full of the most various qualities: soul-crushing tragedy, lyrical celebration, high comedy, storytelling ebullience. Rusty Barbed Wire: Selected Poems, now with us at last, brings to the community of readers raw power and radical beauty.

David Lee was Utah's first poet laureate; in 2001 he was finalist-runner up for United States Poet Laureate. He is the author of two dozen volumes of poetry, including The Porcine Canticles, A Legacy of Shadows, So Quietly the Earth, Last Call, and Mine Tailings. A former seminary student and semi-pro baseball player, and hog farmer. He has a PhD. with a concentration in John Milton and taught at Southern Utah University for over three decades where he received every teaching award given by the university including being named Professor of the Year on three occasions. His awards include multiple fellowships from the National Endowment for the Arts and the National Endowment for the Humanities, Western States Book Award, Mountain and Plains States Booksellers Award, Critics Choice Award, Utah Book Awards, Elkhorn Poetry Prize, Evolutionary Poem of the Year, Utah Governor's Award for Lifetime Achievement in the Arts, Utah Governor's Merit Award in the Humanities, and an Honorary Doctorate of Humane Letters. The Utah Humanities Council and Utah Education Association named him one of the top 12 writers in Utah literary history and he was the fifth academic in Utah higher education to be named a Lifetime Fellow by the Utah Academy of Arts and Sciences. Retired, he scribbles and wanders rural roads and byways, all at about the same rate and pace, and maintains his intense training schedule to achieve his goal of becoming a World Class Piddler. David Lee currently resides in Seaside, Oregon.