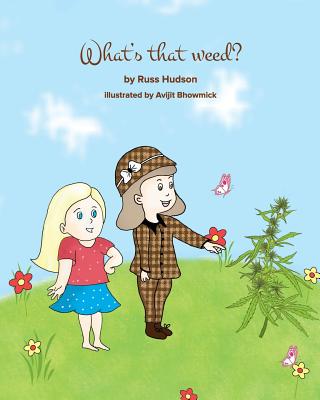 When Emmy visits her new friend Stella's farm, she discovers a mysterious plant called Weed. But Emmy soon realizes that Weed is a very special plant. Used by Stella's family in food, medicine, and more, Emmy quickly learns that Weed is anything but a weed. Join Emmy and Stella as they investigate how this simple little plant is used in many ways, every day, by normal, happy people.

Russ Hudson was born in 1977 to a 15-year-old mother, and was orphaned several years later. After a childhood spent in group homes, foster homes, adopted homes, institutions, juvenile detention centers, and jail, Hudson became intimately familiar with the underground world and various black markets; especially the illicit markets for cannabis. Initially plying his natural writing talents by penning essays for college students, Hudson later became a successful ghostwriter, eventually turning his pen toward the burgeoning world of legal marijuana. Today Hudson has carved out a niche as a trusted international cannabis consultant, living and working in Barcelona, Spain, and Maine, United States, where he lives on a small off-grid farm with his wife and daughter.