Theodore Roosevelt for the Defense: The Courtroom Battle to Save His Legacy (MP3 CD) 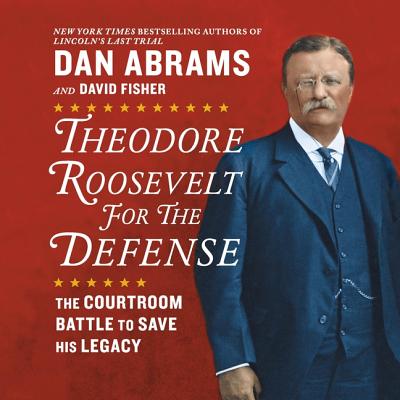 By Dan Abrams (Read by), David Fisher, Roger Wayne (Read by)
Email or call for price

New York Times bestselling authors of Lincoln's Last Trial take readers inside the courtroom to witness an epic case in which Theodore Roosevelt, weighing one last presidential run, challenged corruption in the political party that made him.

No more dramatic courtroom scene has ever been enacted, reported the Syracuse Herald on May 22, 1915 as it covered the greatest libel suit in history, a battle fought between former President Theodore Roosevelt and the leader of the Republican party.

Teddy Roosevelt, the boisterous and mostly beloved national hero, had accused his former friend and political ally, now turned rival, the Republican Party leader William Barnes of corruption. The furious Barnes responded by suing Roosevelt for an enormous sum that would have financially devastated him.

But the trial wasn't about money, it was a fight for reputation. For Roosevelt this was to be his last hurrah. He still harbored political dreams, and there were strong indications he intended to make one more run for the White House. Barnes had his own political ambitions, planning to run for the United States Senate. Those hopes would be dashed if he could not defeat a man so widely respected as Colonel Roosevelt.

Following the case through court transcripts, news reports, and other primary sources, New York Times bestselling authors Dan Abrams and David Fisher present a high-definition picture of the former president, still fighting for his own political career and, just as importantly, the patriotic ideals he held dear.