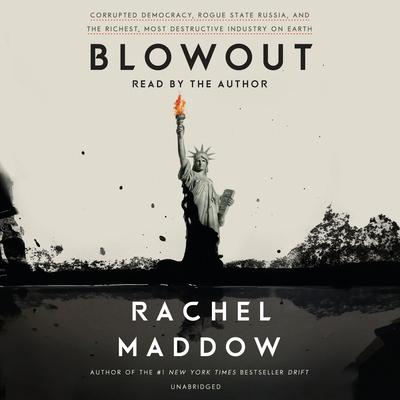 “A rollickingly well-written book, filled with fascinating, exciting, and alarming stories about the impact of the oil and gas industry on the world today.”—The New York Times Book Review

In 2010, the words “earthquake swarm” entered the lexicon in Oklahoma. That same year, a trove of Michael Jackson memorabilia—including his iconic crystal-encrusted white glove—was sold at auction for over $1 million to a guy who was, officially, just the lowly forestry minister of the tiny nation of Equatorial Guinea. And in 2014, Ukrainian revolutionaries raided the palace of their ousted president and found a zoo of peacocks, gilded toilets, and a floating restaurant modeled after a Spanish galleon. Unlikely as it might seem, there is a thread connecting these events, and Rachel Maddow follows it to its crooked source: the unimaginably lucrative and equally corrupting oil and gas industry.

With her trademark black humor, Maddow takes us on a switchback journey around the globe, revealing the greed and incompetence of Big Oil and Gas along the way, and drawing a surprising conclusion about why the Russian government hacked the 2016 U.S. election. She deftly shows how Russia’s rich reserves of crude have, paradoxically, stunted its growth, forcing Putin to maintain his power by spreading Russia’s rot into its rivals, its neighbors, the West’s most important alliances, and the United States. Chevron, BP, and a host of other industry players get their star turn, most notably ExxonMobil and the deceptively well-behaved Rex Tillerson. The oil and gas industry has weakened democracies in developed and developing countries, fouled oceans and rivers, and propped up authoritarian thieves and killers. But being outraged at it is, according to Maddow, “like being indignant when a lion takes down and eats a gazelle. You can’t really blame the lion. It’s in her nature.”

Blowout is a call to contain the lion: to stop subsidizing the wealthiest businesses on earth, to fight for transparency, and to check the influence of the world’s most destructive industry and its enablers. The stakes have never been higher. As Maddow writes, “Democracy either wins this one or disappears.”

Rachel Maddow is host of the Emmy Award–winning Rachel Maddow Show on MSNBC, as well as the #1 New York Times bestselling author of Drift: The Unmooring of American Military Power; Blowout: Corrupted Democracy, Rogue State Russia, and the Richest, Most Destructive Industry on Earth; and Bag Man: The Wild Crimes, Audacious Cover-Up, and Spectacular Downfall of a Brazen Crook in the White House. Maddow received a bachelor’s degree in public policy from Stanford University and earned her doctorate in political science at Oxford University. She lives in New York City and Massachusetts with her partner, artist Susan Mikula.

“Blowout is a rollickingly well-written book, filled with fascinating, exciting and alarming stories about the impact of the oil and gas industry on the world today. . . . [It features] many colorful tales about villains, scoundrels and adventurers. . . . A brilliant description of many of the problems caused by our reliance on fossil fuels.”—The New York Times Book Review

“An account of international intrigue, high finance, low characters, and outrageous legal and illegal acts that put the global economy and Western democracy at grave risk . . . [Maddow] tells this tale deliberately and methodically, building her case not as a cable commentator, but as a Rhodes Scholar. . . . She displays a deep understanding of what makes Russia work in the age of Putin.”—Boston Globe

“I can’t stress enough what a great storyteller Rachel Maddow is. [She carries] the reader through some hair-raising journalism in such an engaging and propulsive fashion you simply cannot put the book down. . . . It has left a most lasting impression.” —San Francisco Chronicle

“At its heart, this book is a tale of two countries, the United States and Russia, and how, as Maddow sees it—individually and together—they have been warped by a rapacious fossil fuel industry. . . . Fulminating comes easy to Rachel Maddow. What sets her apart from other serial fulminators is that she does it with facts—and sardonic wit.”—The Washington Post

“All fans of Maddow, and even her detractors, will learn something new from this highly readable yet impressively detailed book. Anyone interested in the covert deals that change the nature of the global environmental and political landscape will devour. A must-have for all collections.”—Library Journal (starred review)

“Radiates zing, intelligence, and black humor. Much like its author.”—InStyle

“[Maddow] may be a popular, progressive news-and-commentary anchor on MSNBC, but it's not to be forgotten that she holds a doctorate in politics from Oxford and seems to devour whole libraries of data before breakfast each day. . . . Expect a tweetstorm as Maddow’s indictment of a corrupt industry finds readers—and it deserves many.”—Kirkus Reviews (starred review)

“Known for her intense inquiries into complex subjects, Maddow brings her laser-like intuitiveness and keen and wily perception to Big Oil, that stalwart of global economics, and the shadowy nexus of commerce and politics. Maddow likes murky, the murkier the better, and her examination of the intricacies of off-shore drilling, transnational pipelines, and hydraulic fracking is as deep as the coveted wells themselves. . . . Like trailblazing journalists before her, Maddow exposes both the slapdash and sinister practices underlying geopolitics and energy policies and revels in peeling back the layers of malfeasance to stoke righteous outrage.”—Booklist (starred review)