On The Genealogy Of Morals & Ecce Homo (2In1) (Paperback) 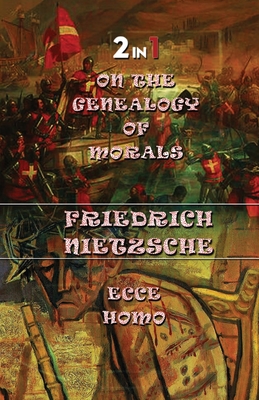 By Friedrich Wilhelm Nietzsche
Email or call for price

The great philosopher's major work on ethics, along with Ecce Homo, Nietzche's remarkable review of his life and works. On the Genealogy of Morals (1887) shows him using philsophy, psychology, and classical philology in an effort to give new direction to an ancient discipline.
The work consists of three essays. The first contrasts master morality and slave morality and indicates how the term good has widely different meanings in each. The second inquiry deals with guilt and the bad conscience; the third with ascetic ideals--not only in religion but also in the academy.
Ecce Homo, written in 1898 and first published posthumously in 1908, is Nietzsche's review of his life and works. It contains chapters on all the books he himself published. His interpretations are as fascinating as they are invaluable. Nothing Nietzsche wrote is more stunning stylistically or as a human document.
Walter Kaufmann's masterful translations are faithful of the word and spirit of Nietzsche, and his running footnote commentaries on both books are more comprehensive than those in his other Nietzsche translations because these tow works have been so widely misunderstood.

The philosopher Friedrich Nietzsche was born in Prussia in 1844. After the death of his father, a Lutheran minister, Nietzsche was raised from the age of five by his mother in a household of women. In 1869 he was appointed Professor of Classical Philology at the University of Basel, where he taught until 1879 when poor health forced him to retire. He never recovered from a nervous breakdown in 1889 and died eleven years later. Known for saying that "god is dead," Nietzsche propounded his metaphysical construct of the superiority of the disciplined individual (superman) living in the present over traditional values derived from Christianity and its emphasis on heavenly rewards. His ideas were appropriated by the Fascists, who turned his theories into social realities that he had never intended. Walter Kaufmann was a philosopher and poet, as well as a renowned translator of Friedrich Nietzsche. His books include Nietzsche: Philosopher, Psychologist, Antichrist, From Shakespeare to Existentialism, and Existentialism: From Dostoevsky to Sartre. He was a Professor of Philosophy at Princeton University, where he taught after receiving his Ph.D. from Harvard in 1947 until his death in 1980. He held visiting appointments at many American and foreign universities, including Columbia, Cornell, Heidelberg, Jerusalem, and the Australian National University; and his books have been translated into Dutch, German, Italian, Japanese, and Spanish.