CLANDESTINE - The Times and Secret Life of Mariah Otey Reddick: A Saga of Resistance and Resilience (Paperback) 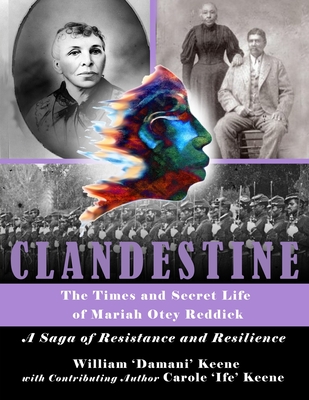 Have Black lives ever mattered? They always have to the African/Black people living them. In bondage. In struggle. In freedom.
Feel their joy, their commitment to family. Feel their love, their pain. Feel their struggle and triumph. Experience their secret lives of resistance, espionage and escape. Based on documented history and inspired by the life of the author's once-enslaved great-grandmother Mariah, this book will enthrall you and plunge you into an avalanche of emotions. CLANDESTINE - The Times and Secret Life of Mariah Otey Reddick places the reader's experience in a broader context - that of the recent extraordinary world-wide movement. That movement has awakened in many a vision of a world of equal justice for all - no matter our skin color or economic status. Grasp another ray of hope in these times of uncertainty via little-known historical gems throughout CLANDESTINE - The Times and Secret Life of Mariah Otey Reddick. It is a unique, timely, and illustrated historical novel. A saga of resistance and resilience of intrigue and adventure centered around a love story. In 1848, Mariah, an enslaved ten-year-old Black girl, is ripped from her mother's embrace as her sister screams in horror. Imagine yourself or your ten-year-old daughter, cousin or niece being given away as a wedding gift. That's Mariah's fate. She is taken from Louisiana to Tennessee, never to see her family again. Clasping the amulet her mother fashioned and gave to her for protection and solace, she holds onto it and the African traditions passed down to her, including her secret African name which means "blessing." Mariah, haunted by a childhood betrayal of another enslaved girl, grows into a resister of bondage and helps others escape slavery. Years later - while working (confirmed fact) in the household of the Confederacy's President, Jefferson Davis - she becomes a spy for the Union. In the rebel army hospital in 1863 in Montgomery, Alabama, a wounded Confederate officer catches Mariah clandestinely passing military information to Union sympathizers. in the rebel army hospital in 1863 in Montgomery, Alabama. Mariah faces either the gallows or a whipping post, but defies the Major when he detains and interrogates her. Stirred by the courage of her Ancestors, Mariah grows up to be a mother (including four sets of twins) and a spy for the Union during the US Civil War. Become enveloped in the hopes and tragedies of her enslaved family and enter Mariah's complex world, where love and devotion coexist with terror and cruelty. Her bravery and tenacity are sparked by the stories of her freedom-fighting Ancestors, including her grandfather who was a sharpshooter at African Fort with the Seminoles in Florida. After the U.S. Civil War, Mariah and Bolen, her true love, struggle against KKK violence, while coping with bitter political conflicts within the family. Together they must thwart a traitorous Colored blackmailer. And they must abort the deadly plans of a crippled and deranged ex-Confederate and his son, a fanatical deserter seeking redemption, both of whom are sworn to revenge. Mariah tempts fate more than once. Her world is one filled with danger, spirituality, vengeance, joy, grief, loyalty, devotion, resistance and resilience. CLANDESTINE, inspired by true events, is the story of Mariah's and her family's struggle for dignity and freedom as told by her great-grandson Damani Keene and his wife, Ife.