Reading and Signing with Diana Ragsdale (Loose Cannons: A Memoir of Mania and Mayhem in a Mormon Family)

Join us for an in-store reading and signing with Diana Cannon-Ragsdale, author of Loose Cannons, Saturday, September 17th at 6 pm.

Diana Cannon-Ragsdale, author of Loose Cannons, is a Utah memoirist, who has lived in Salt Lake City most of her life.  She has been writing her memoir for the past five years.

Prior to writing her book, she graduated from the University of Utah and practiced physical Therapy for sixteen years. Since retiring, she has been exploring her creative side, where she loves writing, dance, and painting.

Life for Diana has never been easy, but through her courage, strength and tenacious personality, she has been able to fight for her sanity, despite being born into total chaos, with two mentally ill parents.

Her childhood memories were foggy or non-existent, but she knew something was wrong with her. When she began to rebuild her relationship with her estranged mother of forty years, her journey of rediscovering and finding her lost-self began. She is grateful to her deceased mother and father, who, as most Mormons do, left behind a plethora of detailed scandalous journals, letters and pictures.

She is on her fourth marriage, has five children (three of her own, two step children, and seven grandchildren who give her unimaginable joy.

Loose Cannons: A Memoir of Mania and Mayhem in a Mormon Family (Paperback)

Diana Cannon-Ragsdale was born into a Mormon dynasty. Her father Ted Cannon was a local celebrity in Salt Lake City, and her family's ancestors were contemporaries of Brigham Young-and they had many dark secrets to keep. 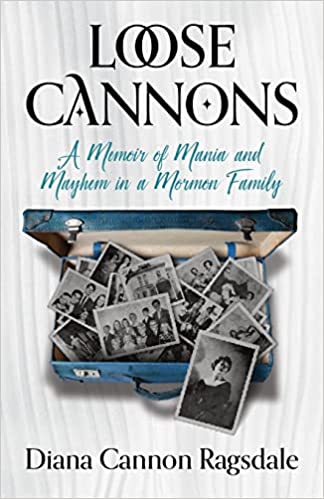