We're delighted to announce an in-store book talk and Q & A with Ron Franscell (author of Shadowman: An Elusive Psycho Killer and the Birth of FBI Profiling) on Thursday, May 12th at 6 PM. We hope to see you there! 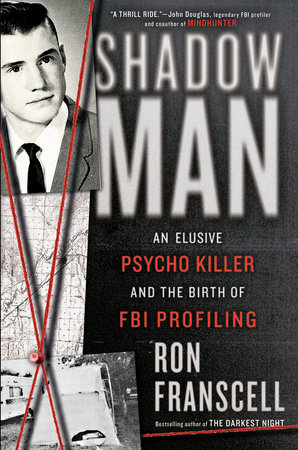 On June 25, 1973, a seven-year-old girl went missing from the Montana campground where her family was vacationing. Somebody had slit open the back of their tent and snatched her from under their noses. None of them saw or heard anything. Susie Jaeger had vanished into thin air, plucked by a shadow.

The largest manhunt in Montana’s history ensued, led by the FBI. As days stretched into weeks, and weeks into months, Special Agent Pete Dunbar attended a workshop at FBI Headquarters in Quantico, Virgina, led by two agents who had hatched a radical new idea: What if criminals left a psychological trail that would lead us to them? Patrick Mullany, a trained psychologist, and Howard Teten, a veteran criminologist, had created the Behavioral Science Unit to explore this new "voodoo" they called “criminal profiling.”

At Dunbar’s request, Mullany and Teten built the FBI’s first profile of an unknown subject: the UnSub who had snatched Susie Jaeger and, a few months later, a nineteen-year-old waitress. When a suspect was finally arrested, the profile fit him to a T...

A veteran journalist, Ron Franscell is the author of 18 books, including international bestsellers The Darkest Night and Edgar-nominated true crime Morgue: A Life in Death. His newest, ShadowMan: An Elusive Psycho Killer and the Birth of FBI Profiling, was released in March by Berkley/Penguin-Random House.

ShadowMan: An Elusive Psycho Killer and the Birth of FBI Profiling (Hardcover)

"Mindhunter crossed with American Gothic. This chilling story has the ghostly unease of a nightmare."—Michael Cannell, author of Incendiary: The Psychiatrist, the Mad Bomber and the Invention of Criminal Profiling