We're delighted to announce an in-store storytime with Natalie Jensen and Claudia H. Gesas, authors of the Grannie Rattle Cakes and One Half-Ron series. They'll be reading from the first book in the series, What a Bona Fide Pair. Grannie Rattle Cakes and One-Half Ron may even make a "live" appearance! We hope you'll join us for skeletons, cupcakes, and friendship on October 22nd at 2 PM. We'd love to see you there! 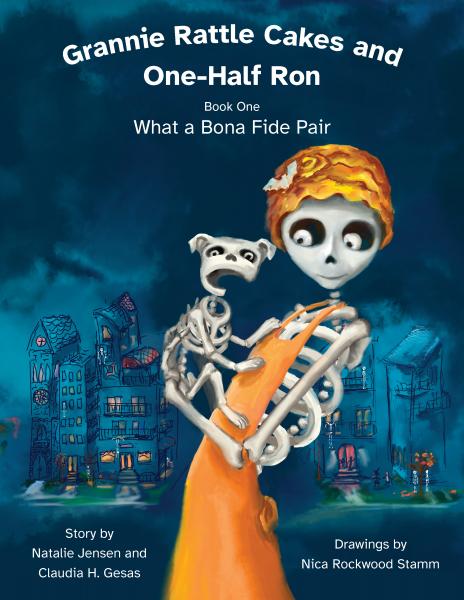 This is the story about Grannie Rattle Cakes and One-Half Ron. They have been hanging out at my bakery for many years during Halloween. They have been dressed in different outfits and have been given funny names. These two skeleton friends (one being a little dog) have become beloved fixtures in my store.

I began watching the way that children and adults responded to them. I started imagining what happened to these two after Halloween.  Did they have a party, make new friends, or go on adventures together?

My mother and I began to write a story about these two skeletons. We named them Grannie Rattle Cakes and One-Half Ron. Their experiences would eventually become a series of stories.  We contacted a professional illustrator to bring these characters to life.

Our first book is called What a Bona Fide Pair.  It describes how Grannie Rattle Cakes meets One-Half Ron!

Watch for more stories to come where they will have some wonderful adventures together after Halloween such as, two skeletons flying to the North Pole!!! Who’s ever heard of such a thing?

Claudia H. Gesas has always been fascinated with words and a weighty "turn of phrase." She has a Master of Arts in Languages and Literature, has written poems and essays, and has taught French and ESL English for many years. She works as a support coordinator at Services for People with Disabilities in Utah. She is an advocate for providing opportunities that build confidence and independence for her client.

Natalie Jensen has a Master in Social Work from the University of Utah. She has been a family therapist working with children at a mental health center. She currently owns a cupcake bakery that she opened in honor of her daughter who lives with cerebral palsy. Natalie conducts continuous birthday and tea parties for children at her bakery. She also reads to children on her Facebook page. Her favorite activity is to see children listen, laugh, question, and share a common experience with a book. Natalie resides in Salt Lake City, Utah with her family.

Nica Rockwood Stamm is rumored to have had a paintbrush in hand when she arrived in this world. When she is not illustrating, she designs displays for museums and parks. She loves learning, traveling, and time with her family. Nica was dreadfully afraid of dogs as a child. Thankfully, she takes great joy from her dog Izzy and new friend One-Half Ron.