We're delighted to announce a virtual conversation with Jaime Lowe, author of Breathing Fire: Female Inmate Firefighters on the Front Lines of California's Wildfires, and local activist and ACLU of Utah coordinator Sydni Makemo. Join us on our YouTube channel Monday, August 9th at 7 PM MDT to catch the livestream!

If you'd like to support the work the ACLU of Utah is doing to fight for individual rights and liberties, please consider making a donation. 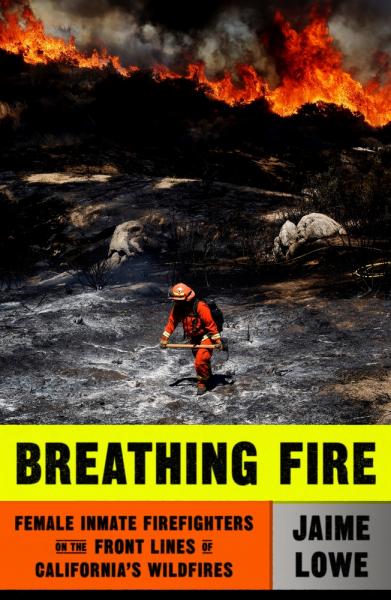 California’s fire season gets hotter, longer, and more extreme every year — fire season is now year-round. Of the thousands of firefighters who battle California’s blazes every year, roughly 30 percent of the on-the-ground wildland crews are inmates earning a dollar an hour. Approximately 200 of those firefighters are women serving on all-female crews.

In Breathing Fire, Jaime Lowe expands on her revelatory work for The New York Times Magazine. She has spent years getting to know dozens of women who have participated in the fire camp program and spoken to captains, family and friends, correctional officers, and camp commanders. The result is a rare, illuminating look at how the fire camps actually operate — a story that encompasses California’s underlying catastrophes of climate change, economic disparity, and historical injustice, but also draws on deeply personal histories, relationships, desires, frustrations, and the emotional and physical intensity of firefighting.

Lowe’s reporting is a groundbreaking investigation of the prison system, and an intimate portrayal of the women of California’s Correctional Camps who put their lives on the line, while imprisoned, to save a state in peril.

Jaime Lowe is the author of Mental, a memoir about lithium and bipolar disorder, and Digging for Dirt: The Life and Death of ODB, a biography of Ol' Dirty Bastard, a founding member of the Wu-Tang Clan. She is a frequent contributor to the New York Times magazine and other national and international publications. Lowe has contributed to This American Life and Radiolab, and has been featured on NPR and WNYC numerous times.

Sydni has been an activist at heart since she was a child. In 6th grade, when her favorite teacher went on a rant belittling those experiencing homelessness, Sydni stood up demanding “that was not right” and "instead of badmouthing, we should fight to bring about change" explaining we have no right to judge others for their hardships. This resulted in a service project and an apology to the class by the teacher. Due to great hardship in her youth, she eventually found herself experiencing homelessness as a teen and then a stint in Utah State Prison at 18. Regardless, her activism continued and at age 19, she organized “The Running Program” at the women’s state prison facility in Draper, successfully arguing that women prisoners needed the same time and access to physical recreation that men did. She also secured healthier menus for women prisoners, explaining that access to healthy food was essential to their recovery and their success upon leaving those walls.

Based in St. George, Sydni travels throughout Southern Utah to meet new partners, organize events, and keep a lookout for potential ACLU legal cases. Her activism continues with a passion for criminal justice reform, racial justice, immigrant rights - and social justice as a whole. When she’s not working, she loves canyoneering, hiking in the desert, running trails, and instilling the value of always standing up for others in her two children.

A dramatic, revelatory account of the female inmate firefighters who battle California wildfires.