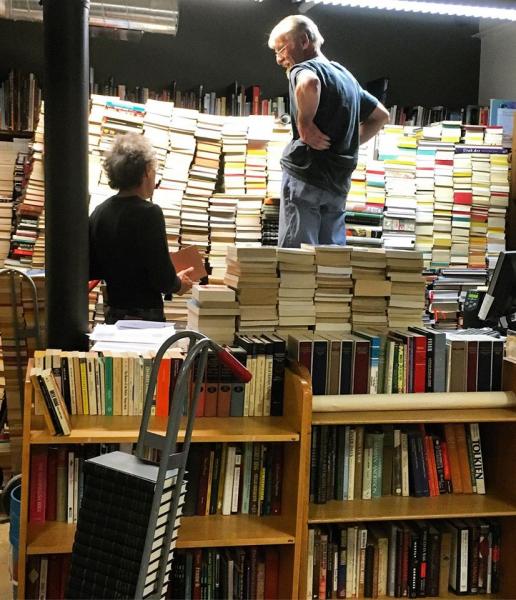 I couldn’t resist coining a term for the mountain of second-hand books we’ve been excavating since late last year: libermount.

The time required mining our libermount has prevented us from buying as much recently as we assess, describe and sort this treasure. We do not like disappointing sellers but we often reach labor and spatial capacity and are obligated to slow the inflow.

Each day, numerous persons offer us books. We try to speak with every seller but with some billion new books printed each year, opportunities to acquire second-hand books are constant. That is why we buy only by appointment. During buying triage, we try to learn roughly how many books a person is trying to sell. The only reasons we care are to estimate how much time appointments might require and whether they will be scheduled in our bookstore or in a home. When I ask about quantity I sometimes hear, “a whole bunch,” or “tons,” and so I ask, “Do you mean 25 or ten thousand?” to get to a usable answer more quickly. In terms of desirability or value, quantity means nothing.

Persons who acquire many books are likely to have uncommon items. Nonetheless, scarcity is only part of the value equation, and not enough of it. Odds are scarce books that are also desirable are found more often in larger book collections. It blows one’s mind how many books a bibliomaniac can amass, even in a small space. At least once annually, Weller Book Works is offered a book collection consisting of thousands of books that requires months to process.

Last November we bought some 7500 volumes from the estate of a customer of ours who had shopped here for over 50 years. It was not a collector’s library but a very smart readers’ library, with canonical titles from many topics in inexpensive good quality editions. Even though I manage the rare book department and delight in the treasures we display there, this giant collection has reminded me of the most important function of books, their effect on those who read them. Books that do not influence or enchant are not much valued by book collectors. The very principle book collecting is nearly meaningless without notable content. The passion for valuable books is subservient to their influence.

In 1917, firebrand publishers Albert Boni and Horace Liveright initiated a new series of books called The Modern Library. Their intention was to publish important works in handy and affordable hardcover editions. The roll out of twelve titles included works by Henrik Ibsen, Friedrich Nietzsche, Robert Louis Stevenson, H.G Wells, and Oscar Wilde. In 1925, Liveright sold Modern Library to his employee Bennett Cerf to relieve one of his pressing debts - in addition to publishing books, Liveright had a hand in bootlegging and the Theatre.

When Cerf founded Random House in 1927, Modern Library was the sturdy foundation on which that empire would rise. Now, a century later, hundreds of well-chosen books have been published by Modern Library.

Since its founding, the Modern Library reputation has waxed and waned, and presently is high. Of course the physical styles of the books varied by era and there occurred a few variant series such as The Illustrated Modern Library series and The Modern Library Giants. They’re not visually remarkable but I especially like the library editions (not to be conflated with ex-library or library copies) because they are bound in delightfully textural buckram with extra sturdy hinges. I am writing about Modern Library because we have hundreds in store right now from the massive library we bought in November.

There are very many titles from which to choose and one of the best things about physical bookstores is the ability of booksellers to connect dots of reading taste. Read enough books and one starts to notice differences in books reflecting their makers. Over years, I have grown respect for certain publishers, printers or imprints. The Modern Library title list is certainly more casual than Britannica’s Great Books or the Harvard Classics. Since youth, I have used the Modern Library imprint how it was intended and how it has been used by each generation since its founding. Inclusion in the series is evidence of the worthiness of a book, even, in some cases, if only for one generation. Need to catch up on some classics? Consider Modern Library. Now is the time. Our Libermount also rendered hundreds of smart and good quality editions from other publishers. Intellectual gluttony. Life is short. How is arrogance even possible?