Monster from the Lumbar Region: On Katy Mongeau's Apostasy 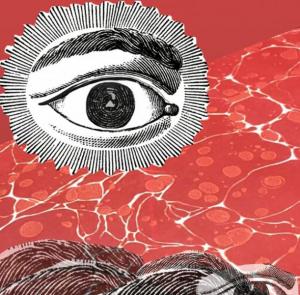 There's something monstrous in your lower back. Is it apostate to your conscious self? A review of Katy Mongeau's Apostasy probably won't answer that question, but the poetry might.

Oftentimes, poets tend to seek avowal from their readers or listeners. They transpose their very selves into their poems and try to turn that self into an emblem, a rallying cry, or a symbol for a generalized experience of something banal like "human nature" or "becoming." Contemporary poetry collections, for the most part, revel in this narcissistic self-representation. Poetry is now more often a search for enthusiastic  by tricking the reader or audience into believing that the self articulated in the poem is the only possible self. Often flawed yet trying nonetheless, this sentimental idol offers refuge to everyone because it is so empty of content that anyone can fill its void with anything they wish. The easiest filling is the already bloated self.

Alas, to our detriment, the negative critical work is largely absent from our discourse, nonetheless I will refrain from providing examples of this bad poetry here. Fortunately, I have an example of poetry that does not edify the author or the reader. Indeed, Katy Mongeau’s Apostasy does quite the opposite.

Mongeau elegantly executes the difficult operation of tearing apart the subject-fantasy in Apostasy. One has to make the self a part of one’s materials to achieve this, and Mongeau does so in a subtle, thoroughly unpedantic manner. To do this, one has to – and it almost seems obvious once you say it – make the self materialize. One has to conjure that alienated image of self in an alien form; one has to make what seems familiar appear alien, and only as this monstrous simulacrum, this ‘bad copy of a reflection,’ does the material begin to manifest its ‘true’ content, articulated in relation to other phenomena that make a world appear.

One poem achieves this quite well by using the first-person perspective to displace and then display the self:

to keep me standing.

The self is not the “I” belonging to the voice of the poem. We realize this only after we ask what sort of monster might be raised in the spine? Our upright posture is at the root of our conception of world and its horizons. Only because we stand vertically do we have a specific experience of horizons. In some of his lectures on geography and what constitutes truth in material science, Immanuel Kant attributed our ability to orient ourselves in space and time to our nervous architecture and our upright orientation relative to the horizontality of the ground we walk upon. (I won’t bore you with the details, but if you’re interested, I recommend this book or the primary source itself, Kant’s lesser known but very intriguing works on geography and material science.) The “something monstrous enough / to keep me standing” of the poem is consciousness predicated on spinal function, while the “I” plays the part of evaluator or judge of this self.

Still, the identity of the “I” and the “me” will remain obscure until we consider the process leading to the state of affairs that the poem describes: the “have raised.” By identifying the purported action of the “I” speaking, we may infer certain qualities about the thing which speaks from the first-person in this poem. Certainly, we can agree that no human is born capable of complex thought let alone simple motor-function. It takes time to grow into your spine, to learn how to use your limbs and torso to labor and travel, to monitor the noises you make with your mouth to avoid social discomfort or gain approval, and so on. So, the process the poem alludes to is the maturation of the organism and its cultivation of cognitive and motile functions. Here, again, the importance of our verticality rears its encephalon: spatial, temporal, and social dimensions acquire meaning only relative to the spine. We utilize concepts only when we find value in them, and the simplest type of value to attribute to something is its use-value. We find concepts like near and far (spatial), belated and precocious (temporal), and productive and indolent (social) useful only insofar as having a spine predicates the meaning of those terms.

This might lead one to conclude that the thing speaking from the first-person perspective is a type of Kantian transcendental subjectivity, something that possesses a priori concepts of space, time, and social production and also seeks to reproduce these same a priori  concepts in other organisms. “God, it’s me, Margaret, are you there? Did you give me a spine?”

Recursive as it is, this cannot be our conclusion. We lack enough evidence to determine who or what this “evaluating I” might be. Perhaps this is a poem exemplifying reflexive self-conscious. The “I” duplicates itself by making it an object twice referred to in the ink on the page. All of this in order to better study and apprehend the self’s qualities. The “I” already contains the possibility of the “something monstrous” in the form of the self, so we require no complex epistemological apparatus to justify why this “I” should be allowed to speak of itself. α really is α, after all.

Tautology isn’t very satisfying or meaningful though, is it? In contrast, the mediating element in the background allowing us to identify “I” with the “monstrous something” as doubles is very interesting. What is it? It would have to something unidentical to the self or α. What transposes the unreflective “I” into a “something monstrous” ultimately yielding an “evaluative-I” confident enough to pass judgement on α? Ultimately, a smooth overcoming of the simple-I to an evaluative-I requires recognition of the “something monstrous”. So, in fact, the “something monstrous” is the middle-term in our dialectical becoming here.

This is a nice story, but it isn’t quite true, is it? Why suppose that there was a simple, unmediated 'I' prior to the recognition of the “something monstrous” when we know that prior to this monster there was an organism with a spine, and a spine has history, memory, and tectonics. The lower vertebrae in the human spine make up the entire spine in other, older organisms, and much of our central nervous system’s activities are automatic or unconscious.

Aha, so in the end, we have to conclude that the “I” is, paradoxically, the unconscious, but only partially in view, since the unconscious cannot be rendered for us positively but only inferred. We ought to give credit to Mongeau for pulling this feat off; people used to spend years in analysis to find get a glimpse of the unconscious. We neither have a self-contained, tautological concept nor a dialectical, meditative self under poetic consideration here. Rather, we have the unconscious, imagined in its evaluative function. Here, the unconscious condemns the thing that keeps the body standing, that “makes the subject go” all by itself, no batteries, crank, or win-up key necessary.

To what extent this is a true representation of the unconscious as judge of the conscious, bipedal self is not an appropriate question, since what we have here is a reason to keep that word ‘true’ out of our mouths. This poem, and many of the others in Apostasy, embargo bold, unreflective epistemological claims about selfhood and self-knowledge. We might say, if we want truth, that Apostasy delivers negative truths; it tells what things cannot be.

In this sense, the rear cover blurb is surprisingly appropriate for this book of poetry: “Apostasy is a becoming and a deathwish – bloom, raunch, wilt, and rot.” Across its pages, life appears, exposes the disgusting fact that life and selfhood really should not exist by all rights, wilts into slim, seeming intangible figures, does not sprout up again, but remains rotting in an epistemological limbo.

Need proof? This review is such proof. For what is a book review if not a chronicle of the deterioration of the literary work? Reviews decompose, but what reading isn’t decomposition? When all is said and done, the truth is that nothing blooms and stays, but is destined to decay. Writing decays as it is read, which is not destruction but, rather, desecration. Your world, my world, and the world are not beautiful totalities deserving of poetic edification. They are simulations of rot. Our spines degrade as we defy our planet’s pull, why shouldn’t the same be true of selves and their representations? What planet or region does this self futilely defy? Apostasy offers a chance to ruminate on these questions and more, avoiding the traps of sentimentality and narcissistic self-flagellation.