No More Boys: A Close Look at Act 17 of Mike Corrao’s Smut-Maker 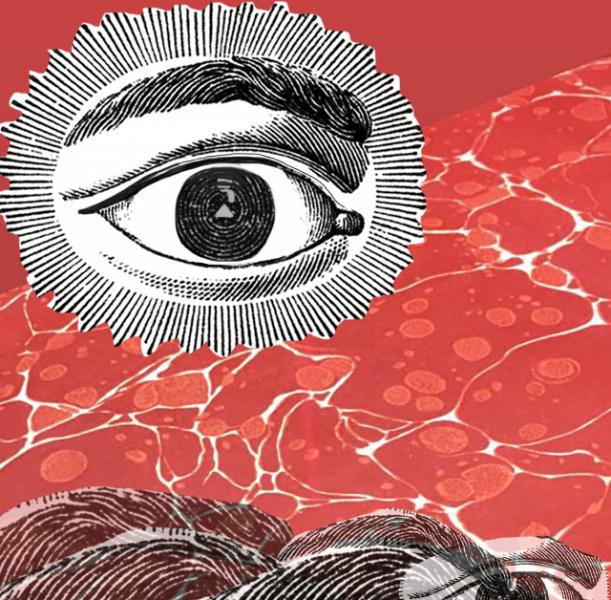 Mike Corrao’s Smut-Maker: The Erotics of Vomit and Jazz will infect you and all other media you encounter.

It is a viral, noxious fetish object.

You have to see it to believe it, though. I’m going to tell you a bit about the book through an inadequate and intentionally myopic analysis here. However, you need to hold the book in your hands, gaze upon it, and wonder as you flip through it to understand just what sort of corrosive dialectic between the reader and the object being read Smut-Maker exposes.

Smut-Maker is visually stunning, and one of the best aspects of owning a physical copy is wondering just how such an object could exist in this market-driven world. Steeped in the logics of utility and profit-motive, that a book can still be an objet d’art and available to everyone is astounding and worthy of the highest praise for Corrao and the publisher, Inside the Castle. So, in addition to provoking serious questions about the relationship between reader, writer, and the object we call a book, Smut-Maker looks great.

Let’s take a few steps back. What exactly is Smut-Maker? Corrao calls it a 72-act play. Indeed, there are 72 sections, which are both numbered and named as acts. The play never identifies a set list of characters. Which character, if there are any, are never identified as delivering specific lines. This could be a one-person show, an extended monologue. But these are not the most difficult obstacles a director would need to hurdle over. Just take a look at a sample of acts from Smut-Maker: 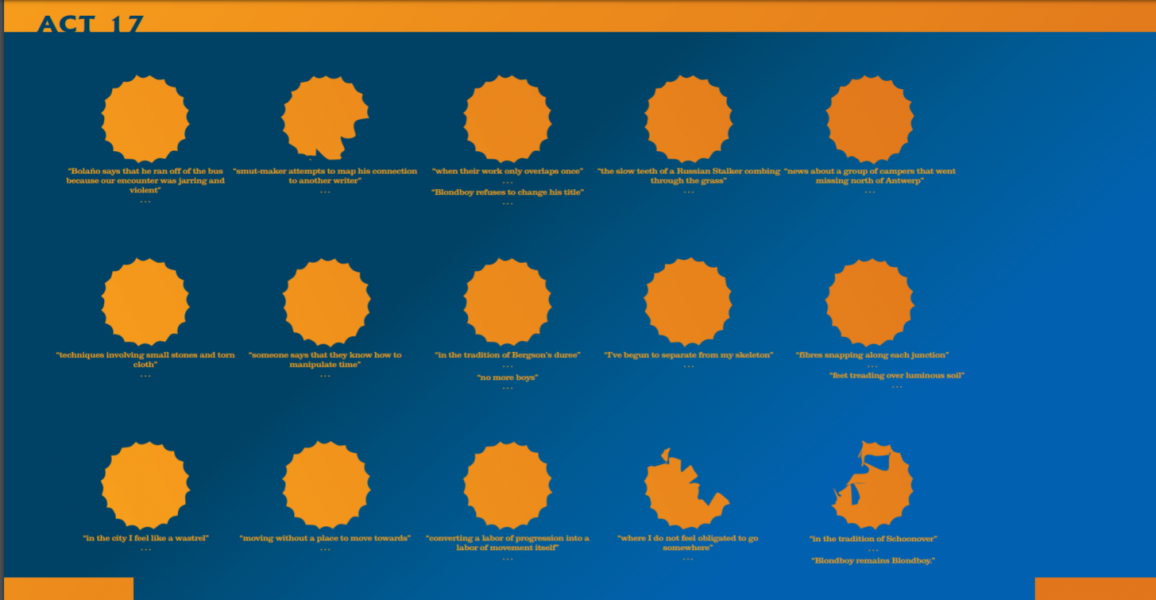 (Please note that these screenshots do not do the book justice.)

How could actors translate the shapes, colors, and positions of each phoneme and expressionist splotch? The challenge is enough to nauseate someone. I’m extremely anxious about writing anything about this project since from the outset it refuses the reader any conventional footholds. This is part of why I think Smut-Maker deserves your attention; it will challenge your sensibilities because it challenges what constitutes a medium’s categorization and hence its reception. As I begin to contribute regularly to Weller Book Works, I’ll be focusing on books that provoke, challenge, and alienate. Corrao’s is an exemplary subject for its adept achievement of all three of those effects.

What even is a book?

Gilles Deleuze and Felix Guattari famously introduced their notorious and much loved and hated theoretical work A Thousand Plateaus: Capitalism and Schizophrenia with a meditation on the question, “What even is a book?” They concluded the following:

A book has neither object nor subject; it is made of variously formed matters, and very different dates and speeds. To attribute the book to a subject is to overlook this working of matters, and the exteriority of their relations. It is to fabricate a beneficent God to explain geological movements. In a book, as in all things, there are lines of articulation or segmentarity, strata and territories; but also lines of flight, movements of deterritorialization and destratification. Comparative rates of flow on these lines produce phenomena of relative slowness and viscosity, or, on the contrary, of acceleration and rupture. All this, lines and measurable speeds, constitutes an assemblage. A book is an assemblage of this kind, and as such is unattributable.

All of this to say that a book is never a stable work, but constantly modulates itself, its surroundings, and its reader by virtue of the way it connects these several and diverse modalities to one another. I know nothing about Corrao’s influences, his educational background, or his philosophical commitments, but the reference to Deleuze and Guattari is appropriate since, as I outlined above, Smut-Maker challenges the way we categorize or how and why we “attribute subjects to a book.” Since both the Deleuzo-Guattarian project and the Corraoan projects aim to problematize the book as an immediate, enduring receptable for information, the comparison could yield much.

Indeed, the affinity between Corrao and Deleuze-Guattari goes beyond a philosophical aim. I could squeeze out solid arguments for why certain moments are coded references to Deleuze and Guattari. The words “rhizome” and “rhizomatic”—famous concepts used by Deleuze and Guattari to illustrate many of their concepts—pop up every now and then.

But, what caught my eye were the repetitions (another important Deleuzian concept, see Difference and Repetition) of a phrase: “in the tradition of Bergson’s duree,” especially its iteration in Act 17 where it is directly below a clementine-colored icosagram; it is above an ellipsis which is itself above the phrase “no more boys”, where we then end in another ellipsis before moving downwards, upwards, leftwards, or rightwards, depending on how you want to sequence, divide, and decode Act 17.

I, for one, will remain here under this single, sickening star.

Henri Bergson was one of the most important philosophers of the twentieth century. Unlike most philosophers, he was a household name in Europe while alive. Deleuze, decades later, would cite him as a major influence and would call him one of the only true metaphysicians.

So, I have artificially mangled this text by relying on some of my cultural reference points as carving tools. Now content with my niche excavated, I could move onto marking my territory by showing you how smart I am for having read Deleuze, Guattari, and Bergson, and maybe I even understood what these very smart people were talking about. This would be piss, though, and piss used to mark territory is often used voluntarily and consciously to achieve a certain status in a pack. Vomit, on the other hand, is normally involuntary, unconscious (even if done voluntarily, what drives one to vomit?), and never bestows status or territory to an animal (to my knowledge).

Really, why focus on “in the tradition of Bergson’s duree”? Subsequent lines mention a desire for motion undivided and unmoving itself, a very succinct summary of Bergson’s concept of “durée” or duration, which, Bergson posited, is the inner apperception of time as constantly mobile, changing, and colored by its experience hic et nunc, whereas time as we conventionally understand it is an immobile, artificial measurement of that inner experience. This latter, conventional approach to time eviscerates any value this experience had by transposing it from the realm of quality to that of quantity.

“no more boys…I’ve begun to separate from my skeleton…”

Some of the named ‘characters’ or people at least mentioned by the unmoored lines that make up Smut-Maker are called Blondeboy and Beatboy. I think there are others, at least one more, but for our (Whose?) purposes merely knowing that there are “boys” is enough, since once the boys are jettisoned from Act 17 through interdiction—“no more”—an unnamed ‘I’ begins to speak and tells us that they and their skeleton are going different ways. Each of these utterances, in turn, under the auspices of clementine icosagrams.

What is the relation between “in the tradition of Bergson’s duree…” and “no more boys…”? Could it be there are no distinct, isolatable second- and third-persons in duration? True movement, which the stultifying nature of capitalist society precludes, abolishes the very idea of genera like “boys”? Locked but free in duration, I am no longer ‘boy,’ since I am not anything ‘longer’ or ‘shorter’ than what I am in the present, sui generis. Gender, and so many other segmenting ideologies, mean very little in the movement of the durée. Perhaps this is the aim of Smut-Maker’s seventeenth act…

Voluntary golden showers of intellectual analysis could gently convince you of one or several possible relations like the one I just eked out, but I’m trying to vomit here. Eerily like Bergson’s attempts to capture durée, vomit occurs only in the here and now; its qualities and values, those that I ascribed just a few paragraphs above, can only be attributed in hindsight, in the artificial division of the temporal experience of myself over the toilet bowl. To paraphrase Deleuze and Guattari, “to attribute vomit a value is to overlook this working of matters [the food from breakfast, lunch, and dinner], and the exteriority of their relations [the toilet bowl and the toilet water, as well as all the diverse matter in the sewage]. It is to fabricate a beneficent God to explain gastrological movements.”

I could go on to elaborate, quite convincingly I think, why it is that the relation between “in the tradition of Bergson’s duree…” and “no more boys…” deal with explicit complications of capitalist time-keeping and liberal gender valorization. But there’s not much point, according to Smut-Maker. If it accords anything, it is that the complex should not be conscious, transparent, and resplendent in the daylight of reason; rather, it should be noxious.

My role as reviewer, critic, theorist, analyst, or armchair pseud, is only to play at beinga beneficent God. I declare, unequivocally and with Smut-Maker as my support, that I could never be a beneficent God, but since I have written something, something coherent with the pretense of meaning, I don’t quite accede to position of erotic jazz vomit. I’m certainly playing the role of a maleficent God as author of this writing. I try in vain to disavow my role as cultural curator, but still I write, authorize thinking about Smut-Maker. I can only implore you to kill me by reading the book yourself and taking up its challenges for yourself.

I’ll stop the analysis here to authorize your movement from reading this review to reading the book.

Support your local independent bookstore and order Mike Corrao’s Smut-Maker through us. The Wellers care about their workers, unlike Jeff Bezos. It’s a small thing, but its something you can do to help make our community singular and distinct from other communities ravaged by Amazon’s homogenizing effect.

Keep watching for future blog posts from Holden about whatever he wants to write about. Maleficent as he is, he has decent taste when it comes to anything risqué, seething, miserable, or otherwise provocative in a world of inane best-seller lists.