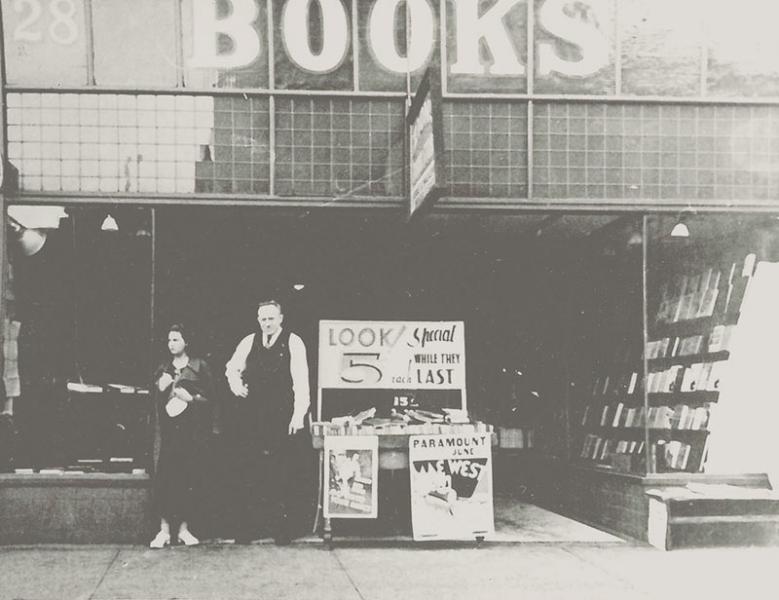 ooks about the Latter Day Saints. The family then had seven children and little money. John and Sam, the two oldest sons, helped their father in the bookstore. In 1932, the Bookstore moved a few doors to 28 East 1st South, a location large enough to enable a larger inventory with new books, including non-Mormon titles.

By 1939, there were eleven Weller children. Gus moved the store to 65 East 2nd South, roughly concurrent with his decision to take up farming. He bought some land in Marion, Utah and put the bookstore in the hands of his older sons. When he moved to the farm, the older children, including Sam, remained in Salt Lake.

In 1943, Sam was drafted into military service for the Second World War. He was 21. He served as private and military police, caring for prisoners. During the War, the bookstore was run by his younger sister Rachel, the second oldest daughter and fourth child. The oldest son, John had moved on to other endeavors. When Sam returned from the war in 1946, he had hoped to use the G.I Bill to study music and film but Gus compelled him to take over the bookstore. As the family story goes, fearing foreclosure, Gus had somehow “gifted” the store to Sam during the war, since wartime laws did not permit forcible closures of businesses owned by soldiers. Sam had given much of his youth to the bookstore and since it hadn’t ever provided enough income, he wasn’t exactly happy with his father’s plan. To make it worse, Zion’s Bookstore was deeply indebted. But Gus got his way and at 24, Sam took over.

Sam was hardworking and charismatic. Within a few years he pulled the store out of debt. In 1949, he met Lila Nelson, a voracious reader who worked at the Deseret News. Sam and Lila fell in love and by 1950, she was working in the bookstore part time. Lila was good with numbers, patient and quiet, so she took over bookkeeping and finance. In 1953, they married. During the 1950's, Zion’s Bookstore blossomed. The post-war economy was much improved and Sam was finally able to hire staff. The bookstore became known for Sam's energy, his zealous commitment to finding books and for having a broad range of new and used books of all topics -- with even a few contraband Henry Miller and D.H. Lawrence titles, for the customer who asked. Sam had also established himself as a formidable rare bookman with accolades for his work in Western History, Mormoniana, Geology and authors of the American West. In 1957 Lila devised an inventory control system that greatly improved inventory management.

In 1961, Zion's Bookstore moved to its longest lasting location at 254 South Main Street. To Sam, the move represented his arrival. In the 1960s, downtown Salt Lake City was a thriving retail district. By that time, Sam's reputation as a bookman was well established. In 1968, he accepted a position on the board of directors for the American Booksellers Association (ABA). Locals took to calling him 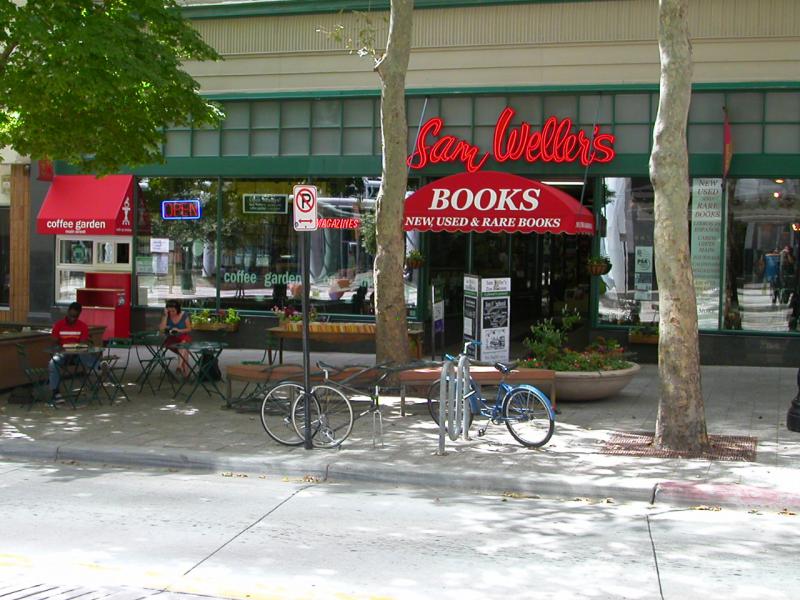 “the Mayor of Main Street” and referring to the bookstore as “Sam’s” In about 1969, at Lila’s suggestion, to reduce confusion between the LDS church-owned department store, ZCMI, to take advantage of Sam’s prominent reputation, and to capitalize on his incidentally Dickensian name (Sam Weller was Mr. Pickwick’s comic servant in Charles Dickens’ first book, The Pickwick Papers), the name of the business was changed to Sam Weller’s Zion Bookstore.

In 1972, a devastating fire burned through a night, destroying much of the building. While the building burned, Sam and dedicated staff raced in and out, rescuing books. The following morning, on their way home from the disaster, Sam spotted a "for rent" sign in a downtown building and asked the employee to whom he was giving a ride to take down the phone number. With characteristic determination and many helpers from the community, he moved the store and re-opened it within days with a fire sale. Several months later, the bookstore moved back into the building on Main Street, enlarged by its expansion into adjacent spaces that had not been reoccupied after the fire.

In the mid 1970's, Sam and Lila with other local booksellers founded the Intermountain Booksellers Association (IBA). In 1977, in partnership with a co-tenant, they bought the David Keith Building, a purchase that was central to our long stay on Main Street.

In 1976, "downtown beautification" which shut down Main Street for months and left it with less parking and fewer businesses. In 1980, a second mall was constructed across the street from the ZCMI mall two blocks north of us. By the late 1980s, the concentration of stores in the two malls gradually caused most of the street-side businesses to fail. Nonetheless, we remained, attracting bibliophiles locally and nationally to our vast collection of new, used and rare books. By then, the store had grown to occupy roughly 25,000 square feet of retail space and huge storage areas. Sam Weller’s Books had  branch stores in neighboring communities between the 1940's and 2000. Most were general new bookstores but one was a textbook store and the one a mid-sized new and second-hand store in Sandy.

In 1989, after dragging his feet for many years, Sam gained membership in the Antiquarian 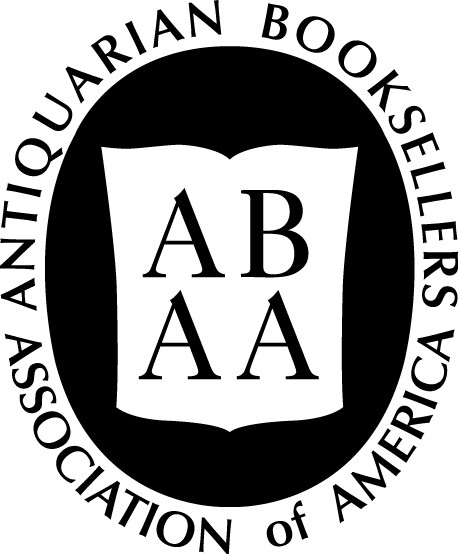 In 1992, Sam was hospitalized for medical problems. It looked like his working days might be over but he made a vigorous recovery and the following year was back at work, slowed down only slightly. In January of 1997, Sam lost his vision and two months later, Lila Weller retired to care for him. In May that year, Catherine Weller, who had worked at Sam Weller’s Books since 1994 and was married to Tony, gave birth to a daughter, Lila Ann, and took a leave of absence. In four tense months, the bookstore's staff had decreased from four Wellers to one. The bookstore was a quieter place without Sam's voluble energy, but his opinions and influence were still felt by all due to daily phone calls Sam made until months before his death in 2009.

In 2012, Sam Weller's Books changed its name to Weller Book Works and moved to historic Trolley 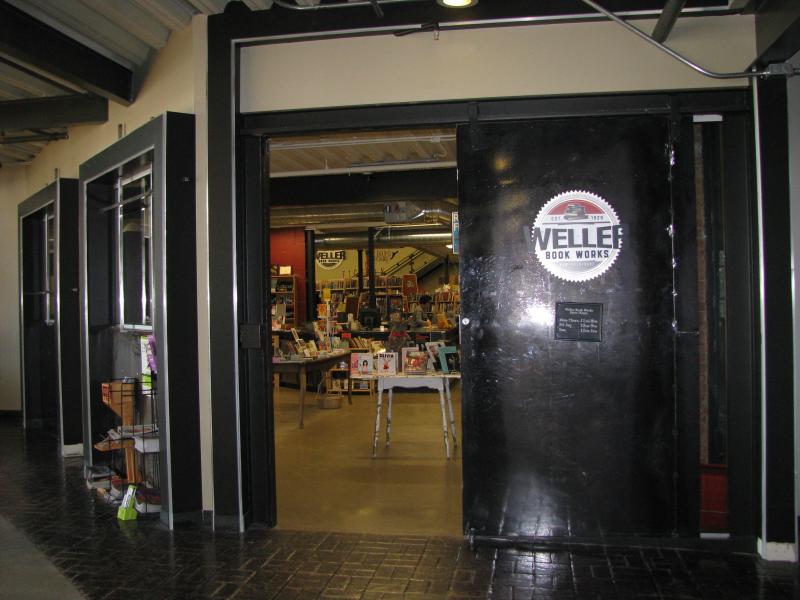 Square. When Sam and Lila retired in 1997 the seeds of the change that led to cataclysmic changes in the book industry had already sprouted. Between 1997 and today, booksellers have had to re-learn much of what we thought we knew. The balance of influence in publishing and retail has shifted and methods of selling changed even before the advent of the digital book. We moved to Trolley Square to accommodate community and cultural changes that made our Main Street store impractical for the new realities of the book business. Although the decision to move was born of hardship, we embraced the opportunity to build a dynamic bookstore that is fun to visit, has a smart selection of new, used and rare books, comfortable browsing, diverse music and booksellers who are passionate about books.

After some lonely years on Main Street, it is great to have neighbors again, especially unique and quality local places like Tabula Rasa, Spark, Desert Edge, Cabin Fever and The Coffee Connection. The new location once again has a full complement of Wellers working in it, Tony and Catherine Weller are joined by Tony’s mother, Lila, who came back to work after Sam passed away and may have been the oldest working bookseller in America. She passed away in 2021 at the age of 106. As important to your experience are the other hard-working booksellers who keep the store running. In addition to several fresh faces with exciting tases and talents, ong-time customers will recognize booksellers Frank and Stephanie who have worked with us for decades buying and selling books, working in the office, running events, and doing things with computers Sam never dreamed of, like entering book descriptions for selling online.

Our location in Trolley Square is full of the mystery and surprise that accompanies good novels, as well as the knowledge and illumination that is gained from a solid work of non-fiction. We are in love with the physical book, in awe of the printed word and welcome people of the book no matter what you read. 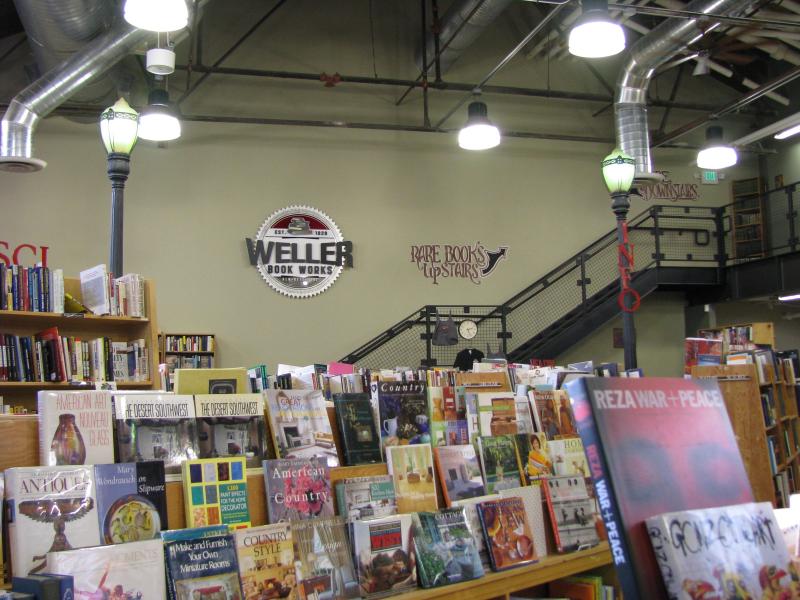