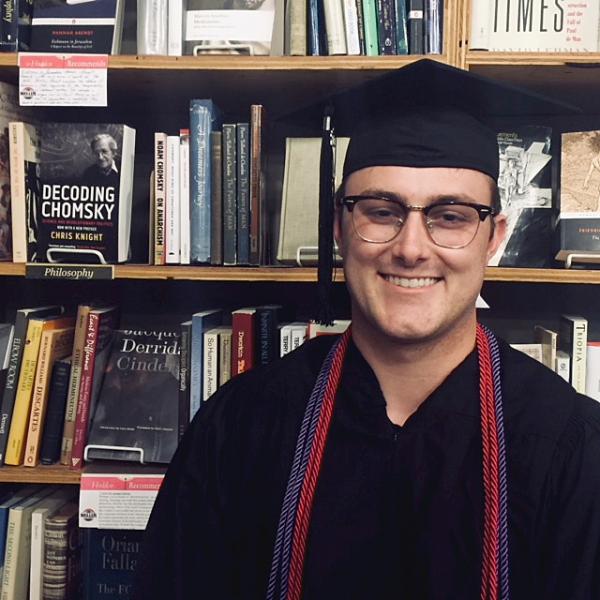 Holden Rasmussen has a mission to help everyday people understand the tools of philosophy.

“I want to push back against the idea that one has to be in academia to understand philosophy because it’s so entangled in our everyday lives.” He explained his broad definition of a philosopher as a ‘conceptual engineer,’ one who works with concepts that are old and need re-tooling. “People use these techniques every day. If you are working with concepts, you are engaging with philosophy.”

For the past two years, Holden has delighted customers and co-workers at Weller Book Works with his insights into philosophy. Recently, he was awarded alternate status for a Fulbright scholarship, and plans to leave for the UK this fall. Though most earn a degree in Philosophy and then specialize through later thesis work, the University of Warwick offers a degree program in Continental Philosophy, which is Holden’s area of study.

“Continental Philosophy is a way to say ‘French and German Philosophy of the 20th century,” Holden said. Existentialism, Psychoanalysis, Post-Modernism, and Marxism are examples of this tradition.

As a Fulbright alternate, Holden is a runner-up out of hundreds of candidates for the funding that would pay for his position at Warwick. Even if he isn’t awarded the Fulbright, just being named an alternate is a boon to his academic career.

“Often, the person who is selected as the principle in the beginning either has other fellowships or other opportunities come up that they take ahead of Fulbright,” Holden said. Being able to list his status as an alternate may help him receive a crucial second glance when it comes to applying for other opportunities.

The issues Holden grapples with most have formed what he anticipates his thesis work will be about: how to advocate for the rights of queer people globally with the problematic history of dividing people by their sexuality.

“Sexuality is a recent concept in the world,” Holden said. “[Defining sexuality] began as a way for psychiatrists to locate disorder – to locate something that they saw as a disease in the late 19th and early 20th century. We haven’t always thought of ourselves in terms of sexuality, as human beings. We’re at a point in time where it seems we have more conversations about diversity and inclusion and what it means to be queer-phobic, homophobic, or trans-phobic. And at the same time, I feel a sense of unease. Why should the queer community embrace identity labels that they didn’t choose?”

Holden shared that he came from a conservative background where being queer was not ok. Though he hoped to find a community of queer people at college who would embrace and understand him, it wasn’t the case for him.

“I actually had a very negative experience. I was seen as ‘not queer enough’ by many of the older gay men. I was even told ‘You’re pretty straight acting.’ I’m not trying to mimic straight people. I act how I feel comfortable. I see this as the internalization of the rules and attitudes that marginalized queers in the first place.”

Holden is passionate about pointing out the entrenched attitudes in the LGBTQiA community, using the tools of philosophy.

“My thesis, and what I think about a lot is grappling with this issue: the need to create concrete gains to improve people’s lives while not recapitulating oppressive ideas.”

Holden brings the same passion to his belief in the college experience. As he explained, the popular misconception that a humanities degree is less useful than a career-oriented track comes from the ‘factory model’ of education, a rigid approach that began in the 1950s which valued practicality and utility above the experience of learning.

“We still have that attitude – people think, go to college, get a career,” he said, and explained that he had originally planned to study neurology with a goal of working in a STEM career. However, with his interest in philosophy, Holden found himself at a precipice: study his passion, or get a career. “What got me over that was realizing I will be learning how to engage with other people critically and analytically. I’ll be learning how to disagree with people respectfully. I can’t think of any job where those skills wouldn’t be applicable.”

He fully acknowledges that philosophy and academia have a stereotyped history. “I don’t want to think about identity and politics in the abstract. Academics has a history/stereotype of being the white tower, not paying attention to what people are really facing. I want to break down the stereotype and convince people that I study philosophy because it matters.”

You can read more from Holden in his weekly summer reading blog, Holden Battles the Summer Doldrums, updated every Wednesday.