More than a Centenary Birthday for Lila Weller! 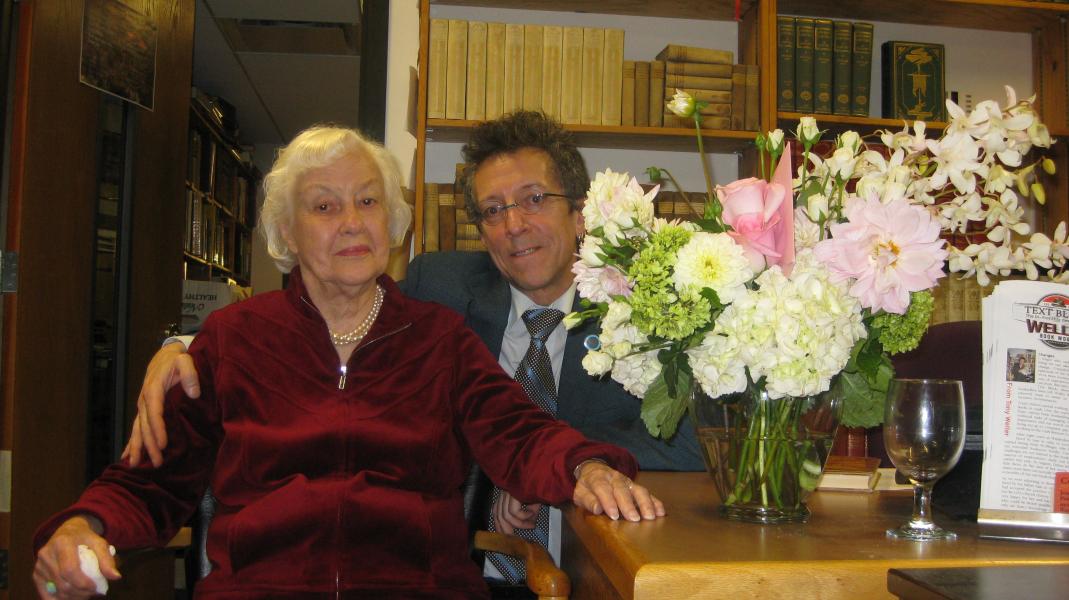 I am a fortunate son; I received uncommonly interesting, open-minded and devoted parents. My parents were older than those of most of my peers, so it feels especially wonderful that I get to help my mom celebrate her 102nd birthday. Although as a 1960s vintage boomer, my sensibilities and tastes are different than my parents’, I believe we are a closer than ordinary family with our shared love of books and the sensibilities informed by their reading. I have worked in this bookstore and with my mother since my childhood, minus 12 years when she was caring for my dad following his retirement. A blog is typically too brief for a century-plus tale so I hope you’ll forgive my short rendering of my mom, Lila Weller’s long and interesting life.

She was born in Wenatchee, Washington on October 25th, 1915, the fifth and last child in a family that until Lila, had had only sons. Her father, a Swedish immigrant worked as Division Superintendent and Section Foreman for The Great Northern Railway. The family lived in a section house at the edge of town by the tracks. She lost her mother in 1920, when she was only four years old, to influenza near the end of the great pandemic. She read much and visited the local library frequently. She was especially fond of biographies and travel narratives. She remembers passing notes to a friend in town through a local switchman via the railway. Because of an uncle’s association, she joined the Rainbow Girls, a Masonic youth organization.

Lila was a good student, the salutatorian of her elementary school. She did very well in high school, finishing in the top 5% of her class and graduated in 1933 and proceeded to business college in Wenatchee. She couldn’t find work so, in 1936, she moved to Salt Lake City to live with her cousin who worked at Auerbach’s, a classy local department store I still miss. Lila got an office job there and joined a local chorus. A year later, she became bookkeeper for the Utah Poultry Producers. In 1938, she married Ellis Peck, a photographer, which, due to a depression-era law, forced her to quit working. A year later, he opened a photography studio where Lila worked retouching negatives and hand coloring photographs until 1948, when she and Ellis divorced. She worked as bookkeeper and secretary for an eye doctor in The Boston Building, where she met Margaret Smith, who became a life-long friend, de facto member of the Weller family, and a bookseller.

Late in 1949, Lila and a friend visited a fortune teller. At loose ends since her divorce, Lila asked if she would find a new place to live. The psychic told her she had a friend seeking a roommate. Lila met Lafaun at Owl Drug, on the ground floor of the Walker Bank Building, half a block west from Zion Bookstore. They decided to become roommates and took an apartment on 2nd Avenue and A Street. When Lafaun saw how many books Lila owned, she decided to introduce her to her bookseller friend, Sam Weller, who was running the bookstore his father had started in 1929, Zion Bookstore, located at 65 East 2nd South. When they went one evening to meet Sam, the women wore jeans, “which was not done.” The bookstore was closed for the night. Sam was engrossed in his work and covered in plaster dust. Lila and Lafaun browsed for a while and Lila began to feel ill. Sam offered a ride and drove them home. 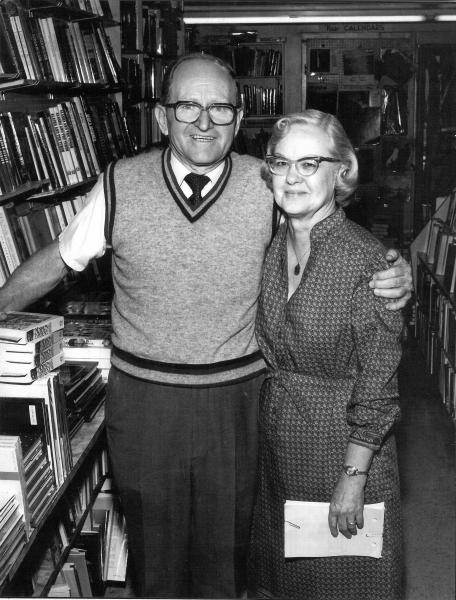 In 1950, Lila became secretary to Theron Liddle, the managing editor of The Deseret News. She visited the bookstore regularly. Lafaun encouraged Sam to foster her as a customer so he invited Lila to a baseball game. She learned about his bookkeeping problems and started helping him in the evenings. They grew closer and married and bought a house in 1953. My mom still lives there today. The following year, she quit working at Deseret News to take over bookkeeping at Weller’s. The signs still read Zion Bookstore but already locals were calling it Weller’s. In 1956, Lila implemented a very efficient card file inventory system that enabled greater control and analysis of inventory than booksellers of that era expected. She initiated store charge accounts shortly later.

Books and music were strong presences in our household. My mom read to me nightly when I was a child. Our home was packed with books but nearly all of the large collection of Jazz and Classical records was Lila’s. Now, I realize she had uncommon taste as I have searched occasionally for CDs of some of her favorite recordings. A musician friend of mine who worked in music stores for years became so impressed with her musical knowledge that I became so too. She enjoys Dixieland, Swing, pre-1960s Jazz, and Classical; Artie Shaw and Tommy Dorsey. I think Lila Weller was the best and most constant reader in our family. Sam got much mileage from his reading but I bet my mom read 10 books for each one Sam or I finished. She still reads biographies, British history and culture, mysteries, jazz history. Her library contains books about food and nutrition, natural science, metaphysics and possibly every Pogo collection. She reads Pride and Prejudice every few years and is fond of Agatha Christie, Ngaio Marsh, D.E. Stevenson, Angela Thirkell and Sara Woods. 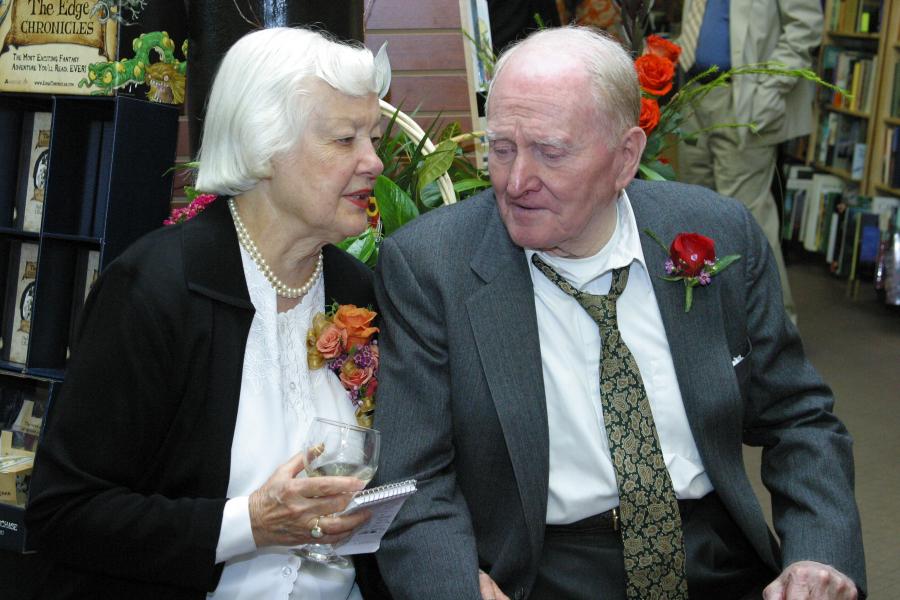 In January 1997, Sam Weller lost his eyesight. In March, Lila retired to care for him. In May, Catherine’s and my daughter, Lila Ann, named after both of her strong and excellent grandmothers, was born. To assist with house work and Sam’s care, my parents hired Debbie Krings who helps my mother still. About half a year after my dad’s death, Lila returned to work. She comes in three or four times a week for three hour shifts of data entry for our inventory and online sales. It feels very special to work here with three generations of our family; Lila Ann is working here as well. A few years ago, we sent out queries to the trade to learn if any bookstore anywhere in the world has an older working bookseller. We are unaware of one.

From 1950 until 1997, Lila Weller was the financial mind and main influence in our bookstore. She was one of very few persons who could calm or frighten Sam. Although she has been a crucial part of this bookstore the early ‘50s, many of you didn’t meet her. She is quiet, calm, thoughtful and rational. From Sam and Margaret I learned other stuff. From my mother I learned patience, calmness and reason.

She celebrated the hundredth year of her life on Sunday, October 25th, 2015. That day our bookstore hoed a celebration with refreshments provided by Crown Burger and live music from The Phoenix Jazz and Swing Band. Today, her 102nd birthday is a bit quieter. Lila is working at her desk surrounded by books, flowers, and cake. 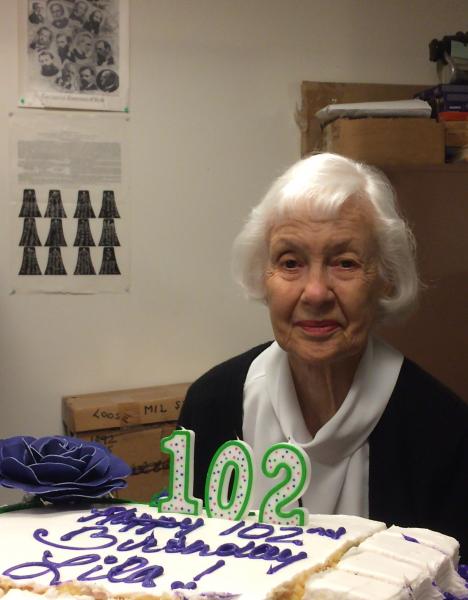